Defending champion Nic Dougall delivered one of South Africa’s fastest ever time-trial performances as he demolished the rest of the field on the opening stage of the Bestmed Tour de Boland, presented by ASG, on Tuesday.

Dougall, who rides for the MTN-Qhubeka feeder team, covered the 19km course from Berg River Dam near Franschhoek to the top of Helshoogte in a blistering time of 22 minutes 21 seconds.

He finished 39 seconds clear of Cannondale-Blend’s Darren Lill, who topped the leader board for most of the day.

Rounding out the podium was Dougall’s teammate Till Drobisch, who clocked in at 23 minutes 10 seconds.

Potchefstroom-based Dougall said the tour was one of his team’s major goal races for the season and that the time-trial played to his strengths as a rider.

“I’ve been training hard and felt good today. It’s my favourite time-trial of the year and I always enjoy it.”

The 21-year-old said it had been difficult to pace his ride due to the strong tailwind in the first half and the steep climb at the end.

“I didn’t want to waste too much energy but also didn’t want to lose any time in the beginning. It was important to save for the end and finish strong.”

Dougall said his aim had been to open up a decent lead on day one to make it easier to defend his title on the three ensuing road stages.

“We’ve got a good team here and a lot of strong guys who climb well, so I think we’ll just see how the race progresses.

“Hopefully we can hold it; we’ve still got a few cards to play.”

With top names like Lill, Dylan Girdlestone (Team Bonitas), Johann Rabie (Team Giant) and internationals Christoff Sauser and Frantisek Rabon (both Meerendal-Songo.info) in the mix, he said they would face stiff competition on the long road stages.

“The field is super strong and a lot of these guys are older and more experienced. But we’ll just take it as it comes.”

The undulating 145km second stage rolls out from Solms-Delta Wine Estate and passes the iconic Taal Monument in Paarl before finishing in front of the Tulbagh Hotel on Wednesday. 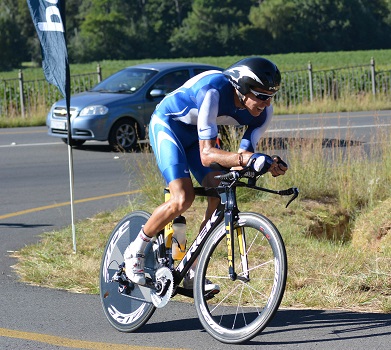 Defending champion Nic Dougall of the MTN-Qhubeka feeder team en route to winning the individual time-trial on the opening stage of the Bestmed Tour de Boland just outside Stellenbosch on Tuesday. 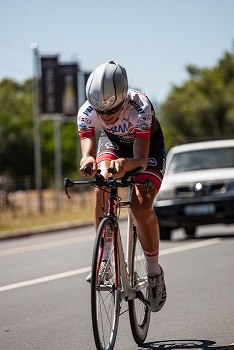 Bestmed-ASG’s Juanita Venter won the women’s individual time-trial on the opening stage of the Bestmed Tour de Boland just outside Stellenbosch on Tuesday.