A torrential downpour did little to dampen FNB NMMU’s spirits, as they rallied to a much-needed 18-12 win over FNB Wits in the fifth round of the FNB Varsity Cup in Johannesburg on Monday night.

The Madibaz kept their hopes in the national tournament alive with a last-gasp try in slippery and wet conditions.

“Weather conditions were pretty atrocious but we’re happy to come away with a win.”

Despite a number of handling errors, Maidza said his side had turned in a gutsy performance and he was pleased with the effort shown under difficult circumstances.

“That’s what you want from a coaching perspective, for the players to try their level best and give it their all. And that’s what we did.”

However, he said there was definite room for improvement in terms of accuracy when they had ball in hand.

“We turned over too many balls. We need to work on our passing and ball carriage and tick those boxes for the coming week.”

But, said Maidza, the win was a welcome result after two losses on the trot to FNB UCT and FNB NWU-Pukke.

“The bottom line is we did the job and we look forward to the next game now.”

The Port Elizabeth-based team face defending champions FNB Tuks in their penultimate game of the round-robin section of the tournament.

“We’re in a precarious situation at the moment and we have to play catch-up rugby,” said Maidza.

“There’s a big job to be done still. It’s critical that we go to Pretoria with the right mindset and that we play to the best of our ability – a win is critical.”

Should they achieve this aim, only the Shimlas stand between Madibaz and their semi-final ambitions.

“Both games are vital. We have to do the job in this one first and make sure that we get the necessary points.”

With a number of teams delivering unexpected performances and predicted outcomes failing to materialise, Maidza said the tournament was far from over.

“It’s critical therefore that we concentrate on improving ourselves.” 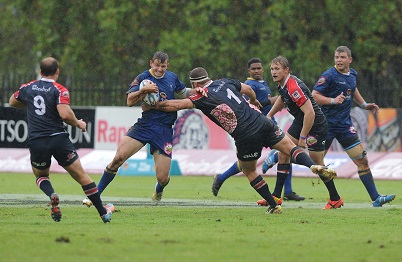 FNB NMMU turned in a gutsy performance to take the win against FNB Wits in wet and slippery conditions on Monday night.