The Madibaz teams made the most of their home-court advantage to dominate the SPAR-NMMU Netball Tournament in Port Elizabeth on Saturday.

A record 54 teams – from clubs as far afield as East London and Grahamstown – descended on the 2nd Avenue Campus courts in Summerstrand for the season-opening tournament.

But in the end it was the hosts who prevailed, taking the honours in three of the five pool finals, as well as the men’s division.

In pool A, the SPAR-NMMU first team claimed a narrow 10-8 victory over local rivals Framesby.

Meanwhile, the SPAR-NMMU Mix team overcame the university’s second-string Mandela side by the same scoreline in the A-reserve section.

All players in the winning sides received prize money in the form of SPAR gift vouchers.

According to event organiser and Madibaz manager Theresa le Roux, the tournament had been very successful, with some pleasing results for the host institution.

“We had a bumper turnout this year; this tournament has really helped to grow the exposure for netball in the metro.”

Le Roux said the tournament had experienced phenomenal growth since SPAR Eastern Cape had come on board as title sponsors six years ago.

The victorious Madibaz first team will once again face off against the top club teams in the metro during the Ria Strydom Tournament, which takes place at the Young Park netball courts next weekend.

For more information and photos, find SPAR EC in Action on Facebook. 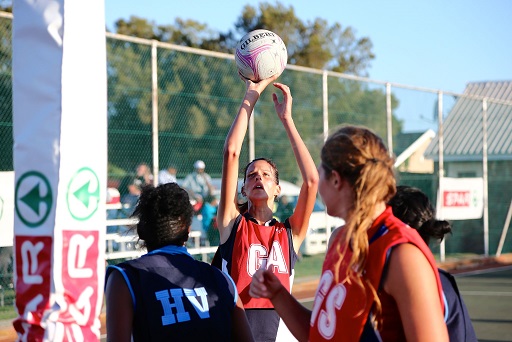 SPAR-NMMU’s Eileen van Zyl takes aim during the season-opening SPAR-NMMU Netball Tournament at the 2nd Avenue Campus in Port Elizabeth on Saturday. The hosts won three of the five pool finals, as well as the men’s section.