Former East London resident Conrad Viljoen will return for another crack at reclaiming his title in the Daily Dispatch SPAR Cycle Tour on February 16.

Multiple winner Viljoen, who finished second last year, will lead a six-man Bestmed-NMMU team in the 100km road race through his old hometown.

Among a number of local riders, the 29-year-old said he expected strong competition from the likes of former national U23 champion and 2012 winner Clinton Barrow.

Now based in Port Elizabeth, Viljoen said his university team always made it a priority to support local Eastern Cape events.

“For me personally, the motivation levels are always higher racing in East London.”

The ex Port Rex Technical High School learner said the race route was very challenging and suited him as a climber.

“The route contains two major climbs in the first half of the race that really splits the field, usually leading to a select group upfront.”

He said while the first 50km were predominantly uphill, the second half of the race was much flatter and faster.

“There’s a climb about eight kilometres from the finish, which is really the last chance to get away for the climbers.

“The wind also plays a big role as the route is mostly on the N2, which exposes the riders.”

Viljoen said he did not anticipate a bunch sprint to the finish but said it could come down to a final selection of five or so riders.

“I would really like to see our team on the top step of the podium as we have a couple of riders in form that will give us some options on the road.”

Viljoen is currently in top form after winning the 30-39 years age category with a solo breakaway at The Herald VW Cycle Tour in PE earlier this month.

On Sunday, he competed against the country’s best to take the runner-up spot in the 30-34 age group at the national road championships in Durban.

It wraps up with the three main road races – the 16km family event, 46km fun ride and 100km feature race – along the Esplanade on Sunday (Feb 16).

Enter online at www.dispatchcycletour.co.za or get an entry form from any East London cycle shop. Alternatively, find Spar EC in Action on Facebook. 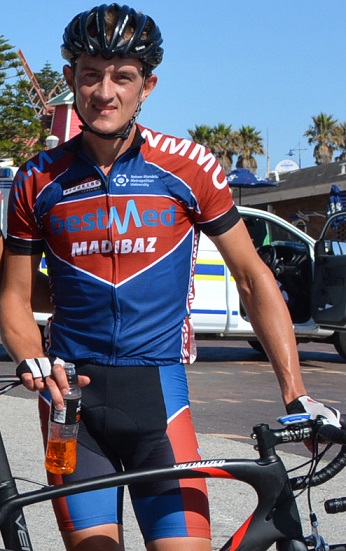 Multiple winner and former East Londoner Conrad Viljoen will return for another crack at the title in the Daily Dispatch SPAR Cycle Tour, which takes place in Buffalo City on Sunday.