With the red tide bloom having decayed in most parts of Algoa Bay, swimmers in this weekend’s SPAR River Mile Festival will have no reason to fear any lingering effects on the Sundays River.

According to estuarine ecology expert Professor Janine Adams of NMMU, the large-scale bloom of Lingulodinium polyedrum had been present in both the Sundays River estuary mouth and the Swartkops River, which is traditionally the home of the race.

In the Sundays River, Adams said the red tide had been localised below the N2 bridge and that swimming above the bridge at Cannonville, where the race takes place, would be safe.

However, she said the bloom had largely died off and that the water should be safe for recreational use during South Africa’s oldest open-water swimming event.

“A red tide is a dense population of microalgal cells or phytoplankton,” said Adams.

“When cold, nutrient-rich water is stirred up by currents, these microalgae use the nutrients to multiply rapidly. The presence of the large mass of cells gives the water its red appearance, hence the term red tide.”

She said the bloom usually entered an estuary mouth with the high tide and appeared to leave on the low tide but the movement was often unpredictable due to the dynamic nature of the coast and prevailing wind conditions.

“Some of our researchers will be sampling the Sundays and Swartkops estuaries to get a clearer picture of the effects of the red tide.

“There may be a possibility of a future recurrence of this microalgae in these estuaries because of the availability of high nutrient concentrations.”

Bornman said the dominant species in Algoa Bay did not appear to be harmful to humans and toxicity tests of mussel and oyster meat indicated no toxins.

“It’s still considered a harmful algal bloom because it causes harm to other marine organisms, mostly through mechanical means – when the cells get stuck in the gills of fish – and by using up the oxygen in the water.”

He said the anoxic conditions were responsible for the widespread fish kills in the bay.

“There could be other toxic species present in the bloom – we must still identify all the species – but they are in very low numbers and should not have an impact.”

As a precautionary measure, Bornman advised local residents to avoid eating locally caught shellfish, which feed on the microalgae, for the next three months.

“Recent upwelling continued to supply the bloom with nutrients, but the surface waters were completely nutrient depleted at the end of last week, so the bloom will quickly decay.”

SPAR Eastern Cape marketing manager Abri Swart said they were pleased to receive the all-clear and were looking forward to welcoming a large field of swimmers to the 90th anniversary edition of the event.

“We’ve got a full weekend of racing for the whole family, plus plenty of entertainment, activities and food stalls for a great day out on the river.”

Enter at www.rivermile.co.za or find SPAR EC in Action on Facebook for more information. 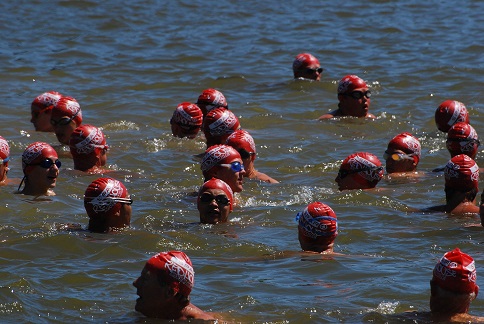