Professional services provider PwC has expanded its investment in the sport of mountain biking by taking up the title sponsorship of the Great Zuurberg Trek in the Eastern Cape.

The firm – which provides industry-focused assurance, tax and advisory services – is the first of the so-called Big Four firms to sponsor a high-profile stage race.

According to partner in charge of the Port Elizabeth office Andrea Puggia, the event provides an ideal opportunity to expand PwC’s footprint in the province.

“We are very pleased to be the title sponsor of the PwC Great Zuurberg Trek and look forward to building relationships with our clients – and prospective clients – on the trails of the Eastern Cape.”

The three-day race takes place from May 30 to June 1 and traverses the picturesque Sundays River Valley, Addo Elephant National Park and the national cross-country course at Hayterdale Trails.

“The province offers some wonderful cycling routes and venues and we’re very pleased to be able to support mountain biking in the region,” said Puggia.

The firm also sponsors the PwC Cycle Park in Johannesburg and hosts two annual corporate mountain bike challenges for clients in Gauteng and the Western Cape.

With two of its regional offices in PE and East London, Puggia said PwC was looking to the PwC Great Zuurberg Trek as an additional means of building long-term relationships with its Eastern Cape target market.

“The current agreement is for 2014 with the option to renew for a three-year period. Brand building happens over time and we believe we will start to see returns on our investment within three years.”

Race organiser Brad Jackson of Mountain Events said he was thrilled at the commitment shown by PwC and believed that they could develop the event into one of the best stage races on the national calendar.

“We have no doubt that we have a winning formula, including some of the best mountain biking terrain in South Africa and a fantastic host venue, all set against a stunning backdrop in the Addo region.

“We see PwC’s commitment as the final ingredient that will make this one of the classic stage races on every mountain biker’s bucket list.”

Jackson said his team had learned a lot from the inaugural event in 2013, and incorporated these lessons into improving the 2014 experience.

“Last year saw riders starting and finishing at different places along a linear route, which meant that the logistics of transport and accommodation were quite complicated.

“This year, we really want riders to settle in and make the Zuurberg Mountain Village their home for the weekend, where they can relax after a hard day’s riding and prepare for the next day’s challenge.”

The 89km opening stage of the new clover route crisscrosses the Sundays River and national park.

On day two, participants ascend into the mountains as they head north along the historical Voortrekker wagon route into the interior.

This 81km stage then takes them over the Zuurberg Pass and down into the vast open spaces of the Karoo.

The final stage over 61km sees riders playing along the southern slopes of the mountains on some of the country’s finest purpose-built single track.

“Riders will find themselves transitioning from fynbos on the mountain tops to yellowwood forest along the riverbeds to Karoo Savannah, often in a matter of kilometres.”

He said the race village was situated within an hour’s drive of the Port Elizabeth International Airport and shuttle services would be available for participants.

The official race beneficiary is the African Unity Foundation, which promotes educational upliftment in the area and works closely with local institutions like Hermitage House Primary School and Addo Elephant National Park. 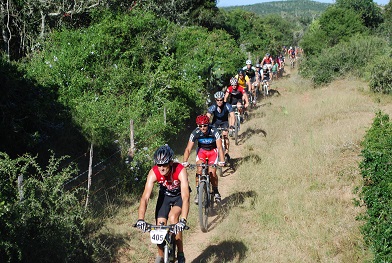 PwC has announced its title sponsorship of the Great Zuurberg Trek – a three-day mountain bike race that starts in Addo on May 30.