After a hiatus of more than a year, former Olympic sprinter Sergio Mullins made a stellar comeback at the EPA Track and Field League meeting at the NMMU Stadium in Port Elizabeth on Saturday.

He faced stiff competition from a crop of younger up-and-coming stars in the 100m, but the 33-year-old managed to assert himself in a commendable early season time of 10.92.

All three however fell short of the proposed qualifying time for this year’s SA Track and Field Championships, which is set at 10.75.

The event, the first hosted by the Madibaz Athletics Club this year, further served as trials for the Ussa national student championships and Varsity Athletics team.

It was also an official qualifying event for the Nelson Mandela Bay athletics squad set to compete at the senior and junior national track and field champs in April.

Madibaz athletes dominated the event with Ischke Senekal standing head and shoulders above the rest in the field disciplines. She broke the Eastern Province record in both the women’s discus and shot put and improved on her personal best in the former.

No other athlete could come close to her 52.54m heave in the discus and the distance was well within the national qualifying standard of 43m.

In the shot put, Senekal also secured a convincing victory with a qualifying throw of 13.97m.

“Although not an EP record, we have not had any athletes achieve this height in a very long time,” said Bothma. “The supporters were on the edge of their seats throughout his attempts.”

Athletes who took on the gruelling 5 000m for men could not keep up with Madibaz runner Amos Nyongo, who stopped the clock in 14:59.02. Hugo Santa Cruz placed a distant second in 15:38.39.

Although these times fell short of the national qualifying standard of 14:20, Bothma said the event drew massive reaction from supporters.

He said the meeting was open to all ages and showcased fantastic future talent. “We saw some promising new talent on display and a few EP records were shattered.” 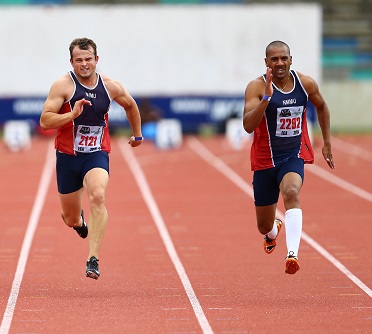 Former Olympic athlete Sergio Mullins (right) made a convincing comeback by winning the 100m for men at the NMMU Stadium in Port Elizabeth on Saturday. 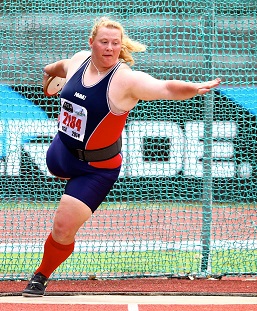 Ischke Senekal set a new Eastern Province record with a throw of 13.97m in the women’s discus at Saturday’s athletics meeting at the NMMU Stadium in Port Elizabeth.