Nolan Hoffman outsprinted a small lead group in the finishing straight to claim his third victory in the 106km Classic at The Herald VW Cycle Tour in Port Elizabeth on Sunday.

Hoffman, riding in the colours of Team Abantu, crossed the line in 2:37:41, just a split-second clear of Bonitas rider HB Kruger. Kruger’s team-mate Jayde Julius rounded out the podium in 2:37:44.

It was also a tight finish in the women’s race, as local favourite Anriette Schoeman (Africa Silks-Bestmed) claimed her fifteenth title, taking fellow PE pro Monique Gerber (Bestmed-NMMU) to the line in 3:10:48.

Hoffman said the pro field had made a nervous start, as they did not know what to expect from the revised route.

The peloton soon settled down and the first attacks started after 10km at the sprint prime on Buffelsfontein Road, which was also won by Hoffman.

Working hard at the front, Kevin Evans (FedGroup-Itec) put in a strong solo effort to distance the front group up the Long Barn climb.

On the Lake Farm climb, Maluleke was the first to drop off and the bunch finally reeled the remaining two leaders in after 30km.

Then, turning onto Butterfield Road, a seven-man breakaway formed after the bunch split in the strong sidewind just after the short uphill drag.

“I was in the front with my team-mate David (Maree) and some really strong riders, so I just put my head down,” said Hoffman.

“It worked and we immediately opened up a gap that quickly grew to over a minute.”

The small lead group – comprising Hoffman, Maree, Evans, Girdlestone, Kruger, Julius and Carl Pasio (Swift) – worked together to extend their advantage to over two minutes by the 50km mark.

Then on the Maitlands hill halfway through the race, the Bonitas climbers attacked once more and Maree dropped off.

“I lost David and I was in a bit of difficulty but I did just enough to hang on to the front guys,” said Hoffman.

“Especially with Bonitas not having a sprinter there, the plan was always to get rid of me. But I had strong allies in Pasio and Evans, who were also alone out there.

“They pulled all the way to the finish and the Bonitas guys tried to attack repeatedly but with the gutter wind, it wasn’t going to stay.”

With Hoffman the only fast man in the final selection, his confidence grew as it came down to a sprint in the closing stretch.

“I’m really happy to have pulled off the win. I was very active over Christmas, racing in Europe on the track – the six-day and World Cup events – so it looks like my form is holding up.”

The Johannesburg-based rider said his next focus would be the UCI Track World Championships at the end of the month. He will then return to South African shores to compete in the Bestmed Tour de Boland and Cape Argus Pick n Pay Cycle Tour in March.

In the women’s race, Schoeman said it had been a tough day out in the windy conditions but that she was glad to add another title to her name.

“It’s been a long time since my last win. I’m really happy to have done it, especially since I didn’t feel that great on the bike today.”

She said she had been training hard in preparation for the national road championships, which start in Durban on Tuesday.

Vickus Boshoff and Quintin Myburgh won the tandem event in 2:48:22. They were followed home by Jade Muller and Warren Dickson in 2:49:13, with Nicolaas Vreken and Chris Nel third in 2:55:53. 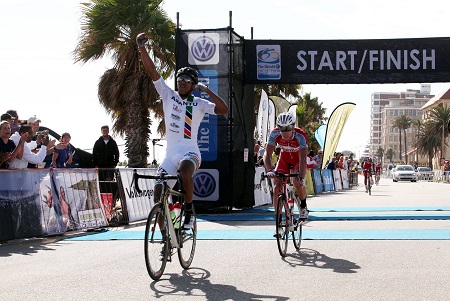 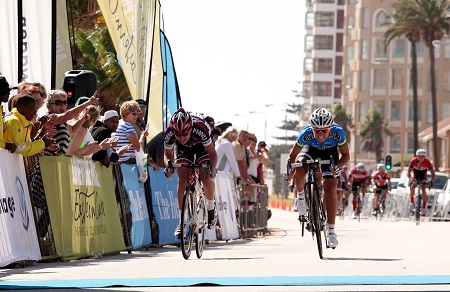