Nelson Mandela Metropolitan University student Marshall Marsh has been selected by Wheelchair Tennis South Africa to compete in two tournaments in the United Kingdom in February.

Marsh, who is in his final year of Human Movement Science studies at NMMU, will be one of four players who form the South African contingent.

He will play in the North West International Tennis Federation 3 Series in Preston from February 13 to 16 and the ITF 2 Series indoor tournament at the Bolton Arena from February 19 to 22.

These events will allow South African players to gain international tour experience and obtain a ranking prior to the World Team Cup in the Netherlands in May.

Marsh has been playing wheelchair tennis for the past four years, and was the first person to play the sport at the Port Elizabeth tertiary institution.

He said he felt honoured to be selected for the upcoming tournaments.

“I am excited to attend because it has always been my dream to travel abroad and compete internationally.”

Marsh was introduced to wheelchair tennis by his schoolteacher, Eugene Stallenberg, at Northern Lights School in PE.

“I fell in love with the sport when I first held a tennis racquet. I feel extremely happy when I’m on the court.”

The university’s tennis coach, Hennie de Klerk, has also been chosen by WTSA to travel with the group.

Marsh first met De Klerk in 2008 during a tennis training camp, which took place in Johannesburg. WTSA arranged the meeting, as they considered this player-coach team a winning combination.

After Marsh completes his studies, he plans to open his own wheelchair tennis academy and coach other disabled and able-bodied athletes.

He believes that his studies have given him the foundations from which to succeed, as he has had access to excellent facilities, and gained an understanding of the practical and technical aspects of managing an athletic career.

Marsh said being a professional athlete had also taught him to remain humble.

“I believe one should always do good, and goodness will follow you.”

He supplements his tennis training with a strenuous exercise regime at the gym. 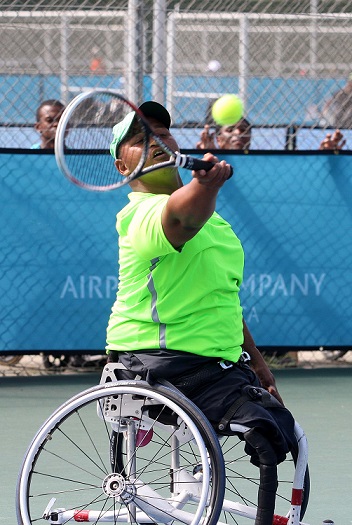 NMMU student Marshall Marsh has been selected to represent South Africa at two international wheelchair tennis tournaments that take place in the United Kingdom in February.