The winner of this year’s Action Ford Berge en Dale Classic, Costa Seibeb, chats to Cyclingnews about his first win on South African soil, his career plans and the state of cycling in his homeland of Namibia.

Q: Was Berge en Dale your first major win on South African soil for the WCC Africa team?
A: Yes, Berge en Dale was my first race win on SA soil but not the last one -many more to come!

Q: Tell us about your race. Did you expect to win?
A: I didn’t expect to win. But it was my birthday, so I got a present from my team-mates. Thanks to them for giving me such a great present. I loved the route; it was a bit hilly, which I really like. It was a great race.

Q: As a fellow Namibian, was Olympian Mannie Heymans’ success a big inspiration or influence on your cycling career?
A: Yes, Mannie Heymans and Dan Craven are the two guys I look up to. They are my role models. I want to get where they are and even achieve what they dream about. I want to be the next Mannie or Dan.

Q: How did you first get into cycling?
A: I started riding on a girl’s pink BMX bike. Later BEN Namibia called to give me a chance to ride for them. A while after that the team was disbanded and my bike was stolen too. I eventually got it back and Dan helped me to get it into racing condition.

Q: Tell us a bit about the cycling scene in Namibia. Is it well supported, does it get good exposure and are there good national structures in place? Or are young pros forced to look elsewhere for a career?
A: Cycling in Namibia is really growing now. We have talented cyclists back home and soon we will have a good team, with more cyclists out of the country racing internationally.

Q: You were second in the national elite road championships in Namibia last year. Do you have a win in your sights at this year’s national champs?
A: Yes, I was second last year and this year I have no choice but to win it. I want to be the Namibian champ. I’ll do what it takes and give all I have to take it.

Q: Who would you say is Namibia’s top cyclist at the moment – is it fair to say it’s you and why?
A: If I can say it, Dan Craven and then it’s me and my team-mate Till Drobisch. Dan is riding at a higher level than us.

Q: You won the Kia Mountain Bike Series in Namibia last year. Where does mountain biking fit into your career and is road racing your passion?
A: Yes, road racing is my passion but, as a cyclist, I love riding any bike. I do mountain biking when it’s my off-season and when I am home.

Q: What would you say were your three top podiums or results of your career so far?
A: Winning the EKZ Zuri Metzgete cycle race (Zurich Grand Prix) in Switzerland and the mountain bike cross-country championships were two big ones for me but there are many more.

Q: What is your best cycling memory so far and why?
A: Racing in Switzerland. I just love the place – it’s so nice and green, with so many cyclists around. Thanks to JP van Zyl for giving me that chance to go and see how the world looks. I won that race there, which was a big thing for me as well as everyone who supports and takes care of me.

Q: What is your worst cycling memory so far and why?
A: Having my bike stolen. I had to stop riding for some time and when I got it back it was not in riding condition. I didn’t have money to repair it and had to make it single speed just to get back on the road.

Q: You were part of the winning team at the Bestmed Tour de Boland last year. Will you be back and will it be a different race compared to last year since you have big names like Bonitas and Abantu and Christoph Sauser competing?
A: Yes, I’ll be back. I love competing against stronger guys than me and I love riding tours. My team and I are ready for it.

Q: When and how did you come to join the WCC Africa team?
A: I first joined them in 2012. The Craven family and some other private sector business people helped me get there. I really appreciated it. Dan’s mother was coaching me and helping with everything.

Q: Talk us through an average day in the life of a rider at the WCCA academy.
A: We train in the morning and then cook something for lunch and eat. Then it’s stretches, shower and off to bed. If I’m wakeful, I’ll chat to my friends, watch TV or help the mechanic.

Q: Besides teaching you the skills of riding, what other value does the academy have in terms of mentoring riders and preparing them for international competition?
A: Being part of an international team, we are all far away from home. So we teach each other our languages, how to cook and so on.

Q: Have you learned a lot from someone like JP van Zyl?
A: JP van Zyl has helped me so much in life and is still helping me. He saw that I had talent and even helped take me to Switzerland and France. I’m grateful to him for taking care of me and the team members too.

Q: Is it difficult to be far from home and family?
A: Before it was hard being far from home but now I am getting used to it. Ja, the team house is just like my home and my mates are my brothers. It’s definitely better now.

Q: How do you as a team of international riders cope with the challenges of working together and overcoming language barriers etcetera?
A: It’s hard but we’re brothers; so we help and teach each other when there are things we don’t know. It’s really amazing how we get together and it’s so nice.

Q: Do you see your place in the WCC Africa team as a stepping-stone to the MTN-Qhubeka ProTour team and top-level international cycling?
A: Yes, it’s my stepping-stone. It’s my dream to ride for MTN-Qhubeka or a top-level team. I believe I can and will give what I have to get there. 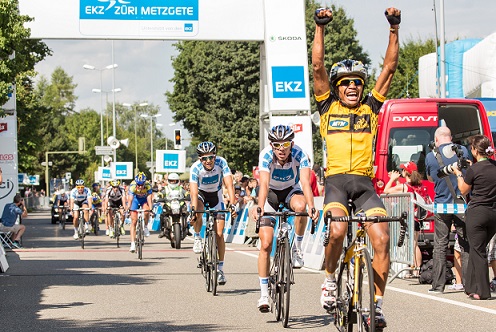 Costa Seibeb celebrates his victory at the EKZ Zuri Metzgete in Zurich, Switzerland, in August.