Back to basics for Madibaz

After their second straight loss in the FNB Varsity Cup, FNB NMMU will be looking to make a comeback in the wake of their 52-16 drubbing at the hands of FNB NWU-Pukke on Monday night.

Madibaz head coach David Maidza acknowledged that his team were simply outplayed in all facets of a game that saw them slip three places in the overall standings.

“We were outmuscled, outplayed and outsmarted. Pukke got all the basics right and did everything they were supposed to do.”

As a team, Madibaz should not have conceded early points, allowed the opposition to dominate or presented easy opportunities to score, said Maidza.

He said six of Pukke’s seven tries were the result of errors by the Port Elizabeth team.

“You cannot play rugby like that. We need to address the mistakes and fix them as quickly as possible.”

After failing to penetrate Pukke’s defences in the first 40 minutes, there was a brief glimmer of hope in the second half as Madibaz scored a brace of tries in the space of two minutes.

It was not enough however to wrest control of the match from the North-West Province team.

But, said Maidza, the tournament was far from over and that they would go back to basics for the remaining round-robin matches.

“There’s not a chance that we’re going to drop our heads now. It’s going to be up until the last game and we have to play.”

As coach he said he would not accept another sub-par performance.

“The players know what is required of them – that we never lie down. I don’t think we can play any poorer than what we did on Monday.”

Focusing on their own game would be critical to future success, he said.

“We know we’ve dug ourselves into a bit of a hole and it’s our responsibility as a team to get ourselves out of that.

“We’ve just got to make the most of where we are at the moment and concentrate on the next game against Wits.

“We must make sure that we prepare thoroughly and come away with nothing less than a win.”

More than any single result, Maidza said it was vital that they continue moving forward with the plans and ambitions of the club.

“There’s not a chance that we’re going to let our supporters down or the people that want to come to this club. We’re not going to let NMMU down.” 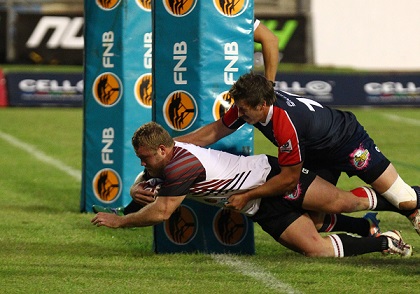 FNB NMMU is on the comeback trail in the FNB Varsity Cup after their 52-16 drubbing at the hands of FNB NWU-Pukke on Monday night.