Emulating the finest European cycling traditions, this year’s Bestmed Tour de Boland is set for a mountain top grand finale four days after it rolls out of Franschhoek in the Cape Winelands on Tuesday.

Starting with an individual time-trial up Helshoogte on day one and ending on Franschhoek Pass on the final stage, the race promises a rare test of the country’s best rouleurs.

According to race director Carinus Lemmer, the organisers’ objective was to assist in rekindling the tradition of classic road tours in South Africa.

“Our aim with the Tour de Boland is to present a true challenge to road riders while showcasing as much as we can of the Boland region.

“It’s such a beautiful place to ride your bike and the roads lend them to cycling. Traffic is generally calm and road users a lot more forgiving than in most other parts of the country.”

Lemmer said his team liked to keep it interesting, and would therefore be changing the format every year to provide a different racing experience and also take the tour to different areas.

The 2014 route passes through a number of picturesque towns in the Cape Winelands, including Paarl, Wellington, Tulbagh and Riebeek-Kasteel.

With three rolling road stages ranging between 121 and 145 kilometres per day, he said the distances would be longer than local riders were used to.

“The stages are long enough to provide a genuine winner and the strongest riders will rise to the top every day.”

With daily sprint primes and king of the mountains hotspots included in the mix, Lemmer said the competitors would have everything to race for.

“The epic finale on the Franschhoek Pass should ensure that the best rider wins. He will be the one who can time-trial, ride rollers and windy conditions, and still climb at the end.”

At seven kilometres long with a seven per cent gradient, it resembles finishes like Mont Ventoux and Alpe d’Huez in the Tour de France, which should be familiar to Czech rider Frantisek Rabon, a seasoned veteran of Le Tour.

Apart from Sauser’s squad, Lemmer said all the top South African professional outfits will be represented.

Although the grand finale might be one hill too far for former Franschhoek local Nolan Hoffman (Abantu), he should be the man to beat in the fast finishes.

Lemmer said he expected a large spectator turnout on the climactic climb.

“Franschhoek has a rich cycling culture. The public are welcome to wait for riders on the pass as it won’t be closed to traffic but we ask them not to overtake large groups or create a bottleneck at the top.”

The tour, which is presented by ASG, will also be open to seeded amateur riders, who will start in a second bunch.

Late entries will be accepted at registration, which takes place at Chris Willemse Cycles, Tyger Valley, on Saturday (9am to 1pm) and at Solms Delta Wine Estate on Monday (2pm to 6pm) and Tuesday (9am to 12pm). 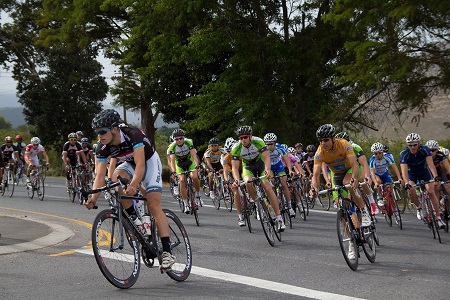 South Africa’s top professional riders will go head to head with a host of international stars in the Cape Winelands during next week’s Bestmed Tour de Boland.