Beukes – who will also vie for the overall Ultimate Quest title by riding the 106km Classic on Sunday – said he was looking forward to one of his favourite events on the racing calendar.

“It’s a great weekend away. The mountain bike route is interesting and the road race is always fun!”

The George-based rider said he was in good form despite struggling with mechanicals in his first major race of the season, the African Continental Mountain Bike Championships, in Cape Town last weekend.

“In the end, my sixth place was quite a good result, considering I chased back from 14th at the halfway stage.

“It wasn’t easy to keep going but I really hate giving up and not giving it 100 per cent, so at least I know I gave it my best shot in the end.”

For the Addo race, Beukes will be up against the likes of newly crowned U23 African cross-country champion James Reid, multiple national title holder Kevin Evans and former SA road champ Darren Lill.

Beukes said Reid would certainly be the man to watch.

“Obviously, James has good form at the moment. He was third last year and the route makes for tactical racing, which he’s really good at.”

Unfortunately for Beukes, he will be without the services of Scott Factory Racing team-mate Philip Buys, who claimed the elite continental title last Saturday.

Buys finished in the runner-up spot behind Beukes in Addo last year. The pair would go on to earn the coveted African jersey at the Cape Epic two months later.

“It would have made it a lot easier to have him here and we could have taken turns at hurting the others,” said Beukes.

“But there are so many events on the calendar that it’s impossible to do all of them, so we have to choose. Phil has different goals than me and it works out better for him to have a solid training block now and peak a bit later.”

Personally speaking, Beukes said he preferred not to go into a race with a pre-existing plan to neutralise the competition.

“I sort of see who has what, and what the route gives me, and work from there.

“There are so many things that can go south that I rather stick to my own guns and make sure I focus on my own game.”

The 26-year-old said the challenging nature of the course – particularly the Hayterdale section where he came second in the XCO nationals – certainly played to his strengths as a rider.

“I think it’s the technical nature of the trails there that suit a rider like me. Tight, twisty single track with a loose surface always brings out the best in me.”

Born and raised in Oudtshoorn, Beukes said the soaring temperatures predicted for the Sundays River Valley would not influence his racing.

“Coming from Oudtshoorn, I really don’t mind a nice sunny day. It will definitely suit me more.” 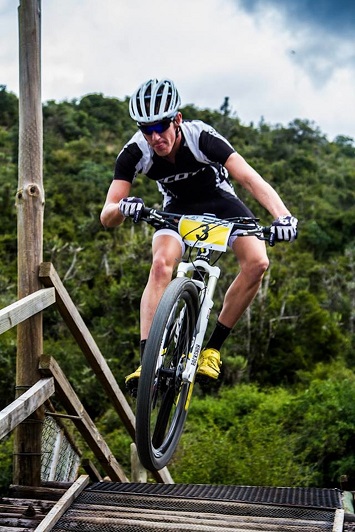 Matthys Beukes will return to defend his 80km Extreme title at The Herald VW Cycle Tour in Addo on Saturday.