NMMU have announced their 23-man team that will take on the FNB Maties in the FNB Varsity Cup, presented by Steinhoff International, in Port Elizabeth on Monday evening.

FNB Madibaz head coach David Maidza said team management had decided to blood a number of new players for their first home game, while retaining the core of the experienced players that helped them reach the semi-finals last year.

“We did very well last year and we have managed to keep the core squad together to maintain continuity,” said Maidza.

Nine new backline players will make their debut for the university, while the forwards will consist of seasoned campaigners such as captain Roy Godfrey, hooker Martin Ferreira and loose forward Tim Agaba.

Both Godfrey and Ferreira have turned out for the SWD Eagles, while Agaba has appeared for the EP Kings.

Vice-captain and fullback Jarryd Buys, who led the SA student sevens team, will anchor the backline.

“What we are looking for is a team that is well rounded and well balanced,” said Maidza.

“We should be able to manage ourselves both when we do not have the ball and when we do.”

The first-round Varsity Cup clash will give Maidza’s men a chance to settle the score after FNB Maties eliminated them by a single point in last year’s competition.

“This is a new season for both teams, we have prepared well and hope that on the day we will be able to put our structures together and come away with a favourable result.

“We know this will be a stern test and the proof of the pudding will be at 4.45pm on Monday evening.”

He said they would be looking to continue with the progress they had made in the early season warm-up matches.

In these, FNB Madibaz acquitted themselves well with a 25-15 victory against SWD Eagles and a narrow 26-29 loss to the Cheetahs.

The university side wrapped up its pre-season fixtures with a 12-10 win over local Community Cup champions Despatch on Tuesday evening.

“The coaching staff have been happy with the steady progress of the team and we want to take this into the Varsity Cup.”

Maidza said the fact that it was a promotion-relegation year would not divert their energies.

“I don’t want to put added pressure on the players over this ruling. I would like us to focus on every game that we play and make the most of it to keep improving throughout the competition.”

The FNB Madibaz will be without the services of flyhalf Justin van Staden and centre Howard Mnisi, who received call-ups to the Pumas and Cheetahs Super Rugby squad respectively.

Experienced flanker Ferdinand Gerber will sit the season out due to a knee injury.

The match will be televised live and starts at 4.45pm at the NMMU Stadium. All FNB Madibaz supporters are encouraged to wear blue as part of the “Blue Monday” campaign to show their support for the team.

Entrance to all matches is free and spectators are advised to arrive earlier to secure a seat. 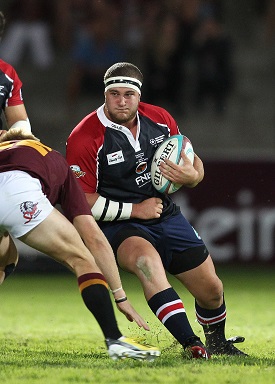