After a strong showing in last week’s Tri-Nations netball series, the Spar Proteas will have another bite at the cherry when they take on Zambia and Zimbabwe in the Diamond Challenge in Port Elizabeth from Sunday.

The reigning African champions will play their two northern neighbours in the second helping of international netball in as many weeks at the NMMU Indoor Sports Centre.

PE-based star Zanele Mdodana said her team was on good form after the international series against England and Trinidad and Tobago.

“I think we’ve been doing very well. We’ve just come back from playing England on their turf and comparing our performance there with the Tri-Nations, there’s already a great improvement.”

With 67 test matches under her belt, Mdodana is the most-capped player in the SA squad. However, the wing defender who also turns out for the local Spar-Madibaz side, said she would miss the Diamond Challenge due to work commitments.

“Every bit of international netball that one can get in is good – the more you play, the better you become.

“We’re preparing for the Commonwealth Games, which is next year, so we must play as much as we can.”

She said the Diamond Challenge was important from a continental perspective, as South Africa needed to prove that they really were the number one team in Africa.

Although Zambia and Zimbabwe currently rank 20th and 25th in the world respectively, Mdodana said neither team would be a walkover for the sixth-placed champs.

“We played them when the Diamond Challenge was first launched in Pretoria last year.

“Because they have a totally different style of play – they favour short balls and bounce passes between players – it’s actually very difficult to counter that. You’re more on the ground than you are in the air.”

She said local spectators could look forward to an exciting all-African encounter.

“Both teams have very versatile, quick attackers and they play ‘fancy’ – they’ve got skills. They’ll look one way and pass the other, so you always have to be alert – it’s not straightforward netball.”

By contrast, Mdodana said the South African style of play tended to be more flowing, letting the ball go, with slower movements.

“With (sport scientist) Elsje Jordaan coming on board now, we’re busy working on our own identity and unique style of play.

“We don’t want to play like Australia or New Zealand or anybody else; we want to say this is our South African style.”

The series kicks off on Sunday with Zambia versus Zimbabwe. On Monday, the hosts play Zimbabwe, followed by Zambia on Tuesday, before the log leaders battle it out in Wednesday’s final. 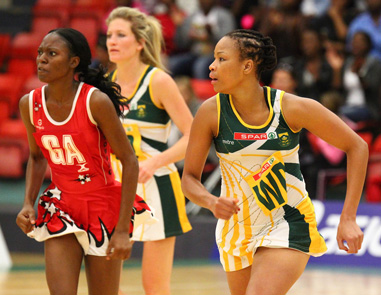 The Spar Proteas’ Zanele Mdodana (right) and Karla Mostert (back) in action against Trinidad and Tobago at the NMMU Indoor Sports Centre in Port Elizabeth. The South Africans will go head to head with Zambia and Zimbabwe in the Diamond Challenge from Sunday to Wednesday at the same venue.