For new road race director Julie Briggs the wheel has turned full circle as she assumes responsibility for The Herald VW Cycle Tour, which her father helped start in Port Elizabeth almost three decades ago.

The 29th edition of what is now South Africa’s second oldest national classic will take place in PE and Addo on February 1 and 2 next year.

“They got together and decided that PE needed a premier race that would cater for the masses. I clearly remember them sitting up late into the night, working on every detail.

“I know that they are proud that I can carry on something that they started so many years ago.”

Briggs and her Mountain Events business partner Brad Jackson will take control of the entire weekend festival of cycling after running the mountain bike events in Addo for the past two years.

“We are very happy with what we have accomplished since the start of our involvement with the mountain bike race and we look forward to organising the road races as well.”

Their introduction to the Addo event was a trial by fire, as they faced torrential rains in 2012 and scorching hot conditions this year.

“For us the most important aspect of a mountain bike race is the quality of the riding – after all that’s what the riders come for.

“So naturally we were bitterly disappointed in 2012 after spending months building amazing singletrack and then having to change the route the day before the race.”

This year presented the opportunity to deliver the intended race experience and the unanimous positive feedback made up for the disappointment, said Briggs.

On the road side, she said cyclists could look forward to some minor changes.

“Whenever we put an event together, our two main priorities are an enjoyable route and rider safety.

Briggs and Jackson, who have both competed at national and international level, organised the cross country and downhill national championships at Zuurberg in July.

Jackson said they had the biggest turnout ever for a national XCO and DHI event, with participants saying it was one of the best courses they had ridden.

“This is really good news for riders in The Herald Cycle Tour, as the mountain bike routes include much of the singletrack at Hayterdale.”

Jackson, who will continue to handle the offroad side, said being a good race director was all about planning and preparation.

“We try to plan our races down to the finest detail, like a scripted performance, so that on race day it’s just a matter of pressing play and enjoying the show.”

He said they were on a drive to encourage PE residents to get behind the annual festival of cycling.

“The road routes go right through the residential heart of the city and we want to see residents out on the roadside with their camping chairs and skottel braais.

“We have designated spectator points along the route where we will have some exciting things happening.”

Jackson said the weekend event had become a virtual year-round responsibility and that it had positive spin-offs in terms of job creation for route builders and attracting a growing number of out-of-town riders to the city.

“What makes The Herald VW Cycle Tour unique for us is that, although it’s made up of a mountain bike and road component, there is a much bigger overlap which makes up the big picture.

“There is a team who pull together to make it all work and we are just privileged to be a part of that.” 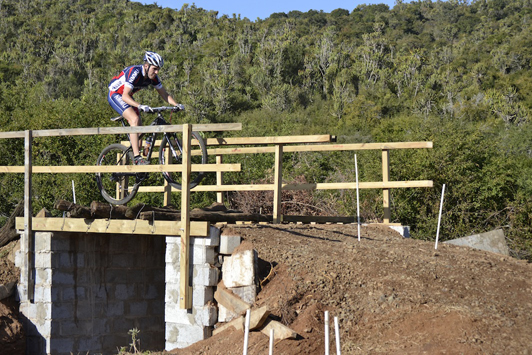