The Middelburg community is uniting to support the families affected by the devastating Rolfe Laboratories explosion, which claimed the lives of six people earlier this month.

Leading the efforts is the Middelburg SPAR, which on Friday delivered groceries worth R10 000 to 33 families impacted by the blast that rocked the small Karoo town on October 14.

“It is terrible tragedy that has affected the entire town and we all felt that we needed to do our part,” said Middelburg SPAR manager Anton Swart.

For Swart and his employees, the disaster was felt on a personal level as the wife of one of their colleagues died in the blast. “One of our merchandisers Donavan Fitsgerald’s wife Melinda was killed.”

Melinda, 33, and five other Rolfe Laboratories employees Violet Fuzani, 65, Chanelle Berg, 20, Eloise Steenkamp, 40, Jonathan Barendse, 25, and Luleka Matholengwe, 22, were killed and more than 40 injured in the explosion that occurred in the aerosol section of the cosmetics and deodorant factory.

“Many of the victims of the blast were breadwinners so we decided to go to the families and find out what they needed most. We then made up parcels for each of the families according to their needs.”

The parcels included anything from food items to non-perishables and cleaning supplies.

“We just wanted to give them something to help them until they get back on their feet. Some of them really needed the assistance; for example, one of the employees killed in the blast supported seven others.”

On Friday a SPAR driver and a few employees went door-to-door to deliver not only the parcels, but a message of support. “We wanted them to know that we were here for them.”

Swart said this gesture had also inspired the rest of the community to do their part.

“Everyone is lending a hand to help the families. Middelburg is a small community and a tragedy like this affects us all.”

With over 100 stores throughout the province, SPAR Eastern Cape marketing manager Abri Swart said the retail group strived to make a positive impact on the surrounding communities.

“As one of the major economic players in the province, it is our responsibility to assist whenever something terrible like this strikes one of our communities.” 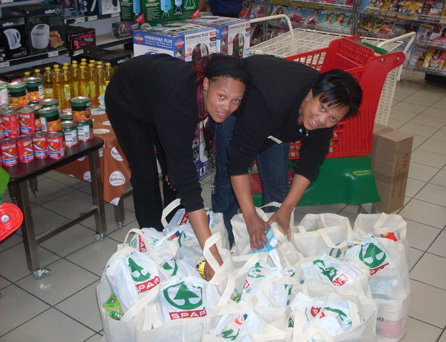 Middelburg SPAR employees Listia Wennaar (left) and Luwelda Settler helped make up grocery parcels which the retailer handed out to families affected by the Rolfe Laboratories explosion earlier this month.