The Stellenbosch-based RE:CM duo hung on to their split-second overnight lead, and their brakes, on the wet and slippery 58km final stage to seal victory over their FedGroup-Itec rivals Kevin Evans and Brandon Stewart.

‘It was quite a big goal for us to win and we’re happy that we could pull it off,” said national marathon series champion Luus.

He and Woolcock crossed the finish line at Thesen Harbour Town in 2:14:32 to secure the overall honours in 7:44:56.

Stage two winners Evans and Stewart overcame fading brakes to take third on the stage in 2:21:28 and the overall runner-up spot in 7:51:53.

Former German Xterra rider Nico Pfitzenmaier and his young Bridge team-mate Timo Cooper finished second on the day in 2:17:15 to round out the overall podium in 8:00:09.

After a cold and cautious start at the Harkerville Forest Station, the main contenders separated themselves from the rest of the field as they quickly rose high above the Indian Ocean.

At the well-known lookout point at Kranshoek, some 15km into the stage, the four top teams – including RE:CM Rowers Matthew Brittain and Rob Dormehl – were at the head of affairs.

But, by the first waterpoint at the 23km mark, the London Olympic gold medallist and his partner had dropped out of contention and were more than a minute and a half behind.

The remaining three teams raced conservatively through the wet and technical Harkerville trails and were still together at the Brackenhill waterfall spectator point near Noetzie.

Woolcock and Luus started asserting themselves as the conditions worsened and pulled 20 seconds clear of the two chasing pairs as they approached the Kruisfontein waterpoint at 40km.

‘We didn’t start off too hard because we knew there were a couple of big climbs coming towards the end,” said Woolcock.

‘With about 20km to go, we started pacing on the climbs and the guys started dropping off.”

Then, like Evans and Stewart, they also ran out of brake pads due to the grinding mud.

‘We were riding the last 15km without brakes, so we preferred to be out on our own,” said Luus.

They maintained a safe distance from their pursuers, with the gap widening to more than two minutes in the closing kilometres.

‘We knew we just had to keep the bikes together to get to the finish,” said Luus.

The FedGroup-Itec duo were not so lucky however, with Hilton-based Stewart forced to run the last two downhills.

‘We couldn’t take any risks, it just wasn’t worth it,” said a visibly disappointed Evans, who hails from the Harkerville area near Plettenberg Bay. ‘But we did enough to keep second overall, so we’re happy.”

The women’s race was dominated from start to finish by Howard & Chamberlain’s Heletje van Staden and her bizhub partner Nicci Grobler. They took their third stage win in 2:54:33 for a combined time of 10:18:23.

In the mixed category, Annari and Philip Jordaan sealed an uncontested victory in 2:59:46 for an overall time of 10:39:32.

In a change of roles, Cape Epic mixed winner Erik Kleinhans took victory in the men’s solo category with reigning Argus champion Anriëtte Schoeman doing the same in the women’s. 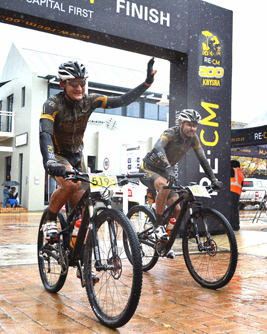 A wet and muddy Lourens Luus (left) and Waylon Woolcock celebrate the stage and overall victory at the RE:CM Knysna 200 on Sunday.