Kevin Evans and Brandon Stewart effectively drew even as their titanic two-team tussle with Waylon Woolcock and Lourens Luus continued on the rain-soaked second stage of the RE:CM Knysna 200 on Saturday.

The FedGroup-Itec riders held off overnight leaders RE:CM in a tense and tactical sprint to the finish at Thesen Harbour Town to win the 68km stage by a single second in 2:31:04.

Little more than half a second now separates Evans and Stewart from Woolcock and Luus, who still lead the overall standings in 5:30:23.

Bridge riders Nico Pfitzenmaier and Timo Cooper crossed the line third in 2:35:13 (5:42:54) to retain the same position in the general classification.

With Stewart showing signs of struggling soon after the start at Rheenendal, Pfitzenmaier and Cooper put in a couple of big early efforts in near-perfect mountain biking conditions.

Woolcock and Luus were able to reel them back each time, with a recovering Stewart and Evans rejoining the leaders among the hills of the Garden Route National Park.

The three teams reached the first waterpoint, in the vicinity of Millwood around 18km into the stage, as the weather took a turn for the worse and the rain set in.

“I said to Kev that my legs were feeling better,” said Stewart. “So he said, ‘Buckle in and climb!'”

They put in several surges on the ascents on the Goudveld forest loop and continued to work hard at the front of the group.

The pace eventually proved too much for the Bridge duo, who were dropped on the technical single track section around the 30km mark.

“When we saw the gap, we took it and rode away with the RE:CM boys,” said Stewart.

At the second waterpoint in the Homtini section of the park, approximately 10km later, Pfitzenmaier and Cooper were one minute off the back.

RE:CM and FedGroup-Itec turned up the gas on the Rheenendal road and by the time they hit the new single track near Phantom Pass they had opened a more than two-minute gap on the chasing pair.

“I knew the finish was going to be a bit dodgy and unsafe if you tried to sprint with four guys,” said Evans.

“So I jumped before we went through the Knysna waterfront and Waylon came with me.

“We left Brandon and Lourens to sprint it out and as Brandon’s got more of a kick than me, I left it to him to deal with the laaitie.”

Evans, who is based in the neighbouring town of Plettenberg Bay, said he was looking forward to the fast-paced 57km final stage through the Harkerville forest, which is literally in his own backyard.

“I know the trails well, so that has to be an advantage. But it seems that it might come down to a sprint again tomorrow and if you lose by one second, well, so be it.”

With more rain predicted for Sunday, Woolcock said the weather would certainly play a role.

“It should make the racing interesting, as Harkerville is wet at the best of times. With Kevin knowing the trails back to front, they’ll definitely have the advantage.

“We’re quite evenly matched, so we’re hoping another team like Bridge trying to take the stage win will be able to split things up for us.”

In the women’s race, Howard & Chamberlain’s Heletje van Staden and Nicci Grobler took the stage win in 3:20:39 (7:23:50) to extend their overall lead.

Mixed category leaders Philip and Annari Jordaan of Mixed Emotions won the day in 3:35:38 (7:39:45) to consolidate their top spot in the overall rankings. 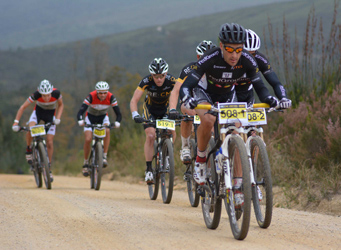 Kevin Evans of FedGroup-Itec drives the pace during the second stage of the RE:CM Knysna 200 on Saturday.
Photo: Coetzee Gouws/Full Stop Communications