Two Port Elizabeth youngsters hope their dream of competing in the RS Tera World Sailing Championships will be plain sailing after a fundraising golf day at the PE Golf Club next Tuesday (July 2).

Junior sailors Justin Harth, 16, and Joshua Woolard, 17, have been selected to represent South Africa at the prestigious international regatta, which takes place from July 28 in Weymouth, England.

According to event organiser Michael King of YBG Events and Tours, the boys needed to raise R35 000 each to cover the costs of taking part.

“Unfortunately, sailing is not a government-funded sport in South Africa,” said King.

In spite of this, he said the country would host the event next year and therefore local competitors needed to prepare themselves by sailing against the world’s best.

“We want to give these two boys a shot at fulfilling their dreams and more importantly representing their country at the highest possible level.

“Other regions in South Africa are doing the same in the hope of giving their kids an opportunity to take part. We believe in supporting our locals and the best way for us to do this is through the golf day.”

Redhouse Yacht Club’s Harth, who is in Grade 10 at Grey High School, ranked sixth. He placed 13th at the 2010 competition in France.

King said his company focused on all things golf-related and specialised in running corporate and open golf days, as well as charity events and fundraisers.

“YBG is striving to bring a fresh young dynamic to the golfing world of the Southern and Eastern Cape, and hopefully South Africa in the very near future.”

Therefore, when the company was approached to assist the two young sportsmen, King readily agreed.

“YBG is working around the clock to make sure the benefits from this golf day will be the biggest the boys receive.”

He said participants could look forward to a fantastic day out on the course, which will be sponsored by Sage Pastel Accounting and Zurcher Consulting and Pastel Support.

“We have all sorts of prizes on offer; anything from boat charters and hotel vouchers to cooking appliances and golf equipment. There will also be raffles and auctions of some special memorabilia.”

King said companies still had the opportunity to sponsor a hole and any donations would be welcome.

“Every little bit counts, so we encourage everyone in the Eastern Cape to take part.” 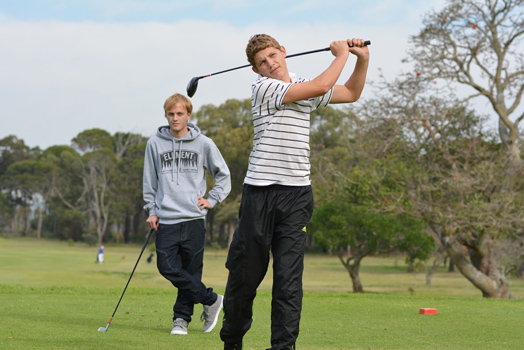 Port Elizabeth’s junior sailors Joshua Woolard (left) and Justin Harth are hoping to attend the RS Tera World Championships in England thanks to a fundraising golf day at PE Golf Club on July 2.