As former University of Johannesburg student Chris Froome prepares to launch his title bid at the Tour de France on Saturday, his alma mater will be doing the same at the national student cycling championships in Port Elizabeth, South Africa, this week.

Froome, who races for British professional outfit Team Sky on the UCI World Tour, will serve as special inspiration for the UJ squad when they take on eight of the country’s top tertiary institutions in the five-stage USSA road tour, said UJ cycling manager Karel Mouton.

Their message to Froome was a simple one: “Make it count”.

The Kenyan-born roadie, who was educated in Johannesburg, won the green points jersey at the 2005 student championships in Cape Town.

And after winning the Critérium du Dauphiné earlier this month, his fourth stage race victory this season, Froome has emerged as a major contender for Le Tour having finished runner-up to compatriot Bradley Wiggins last year.

Mouton remembered Froome as a very modest, mild mannered and shy student. “He was also very determined and followed advice and training suggestions to the letter.”

He recalled how Froome had the management of a five-star Cape Town hotel running around trying to find spinach pasta because the version they served “wasn’t low GI enough” for his race nutrition.

“During his student years, there was seldom an occasion when I found him at home when I called. He was always alone on his bike around Hekpoort, Randfontein, Hartbeespoort Dam or Suikerbosrand Nature Reserve – he taught himself to climb mountains.”

Although the all-rounder put his studies on hold in 2007 to pursue a pro racing career, Mouton said Froome could still be found riding the highways of Gauteng during his annual Christmas visit.

“But this past year Team Sky sponsored a black Jaguar, branded in black and blue, to follow his every move on our notorious roads!”

Although the university won the overall team category two years ago, Mouton said his riders were focused on the individual titles this year.

According to him, geology honours student Fitzpatrick, who won the Bela-Bela Classic in May, was their best hope for the yellow jersey.

Mouton said sports communication student Scheppel, who races with Fitzpatrick for Team Europcar SA, would be most likely to follow in Froome’s footsteps for the green jersey.

The university has a strong record in the latter category, with Michael Pepper also claiming the points classification in 2007 and 2008.

Mouton said he expected fierce competition from the likes of host institution Nelson Mandela Metropolitan University, as well as Cape Peninsula Institute of Technology and the University of Pretoria.

The event, which is sponsored by Bestmed, starts with the mountain biking discipline on Tuesday, followed by the three-day road tour from Wednesday.

The tour features an 84.4km road stage and 10km time-trial on the opening day, the 120km queen stage on day two and a 2.4km hill climb time-trial and criterium on the final day. 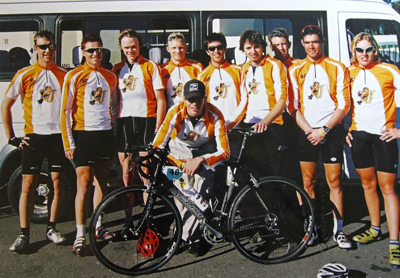 The University of Johannesburg’s 2005 cycling team, featuring Tour de France favourite Chris Froome (third from left). This year’s squad will draw inspiration from him when they compete at the national student championships in Port Elizabeth this week.