Cape Peninsula University of Technology’s Timo Cooper showed his class when he won the national student mountain biking title at the Bestmed USSA cycling championships in Port Elizabeth on Tuesday.

Cooper, who rides professionally for Team Bridge, demonstrated his technical skills on an undulating 50km cross-country circuit at Hopewell Trails just outside the city.

He crossed the line first in 1:36:08, 39 seconds clear of the University of Cape Town’s Greig Knox, while CPUT team-mate Adriaan Louw overcame mechanical problems to take third in 1:42:10.

“I had a lucky day. It was a proper cross-country course, with loads of technical descents, climbs and good single track,” said Cooper, who podiumed with German partner Nico Pfitzenmaier in the recent RE:CM Knysna 200 stage race.

“I’m targeting both the mountain bike and road events, so this is a good start.”

According to Cooper, the race started at a conservative pace on the 7km flat stretch that linked the start/finish area to the 5km loop, which the riders had to do eight times.

“It was the type of course where you knew that if you went into the lap first, you’d come out first,” said Cooper.

Stellenbosch University’s Dominic Calitz was the first to show intent when he attempted a breakaway on the first technical downhill, but a puncture put paid to his efforts.

Former Wines2Whales winner Louw then set a high tempo on the ensuing climb and, with only Cooper able to follow, the CPUT riders opened up a gap on the chasers.

“We got away and rode nicely together,” said Cooper. “On the downhill he’d drop me and then I’d ride hard to catch him again on the climb.”

The two drove the pace upfront on the first three laps until disaster struck on the penultimate loop.

“On the fourth lap Adriaan punctured and from then on I just rode on my own to the finish.”

The third-year sports management student said he had ridden hard enough to win but conservatively enough to sustain his energy levels for the three-day road tour.

“I did enough to keep my lead because there is still a week of hard racing to come.”

The five-stage road tour kicks off at 9am on Wednesday morning with an 84.4km ride from Altona Primary School. This will be followed by a 10km time-trial from the back entrance of Nelson Mandela Metropolitan University at 2pm. 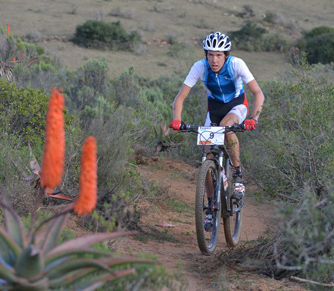