One lucky rider’s raffle ticket paid handsome dividends when he walked away with R50 000 worth of unit trusts at the recent RE:CM Knysna 200 mountain bike race.

Unlike many other stage races, which put the emphasis on prize money for the professionals only, the three-day Garden Route event set out to reward participants across the board.

The lucky draw prize, courtesy of the title sponsor, was won by Digby Webb of Little Mowbray in Cape Town.

A delighted Webb, who finished 71st overall alongside team-mate David Jones, said he had thoroughly enjoyed his debut at the event.

“Despite the chilly wet weather, the vibe was festive, my bike held out and we had a very consistent result.

“The organisation was great, the food was perfect and of course the mountain biking and routes were top-notch. I even got to ride a bit with Victor Matfield – how awesome is that?”

The 44-year-old said he had decided to enter the R250 raffle because it was in aid of a good cause. All proceeds went to the development of underprivileged youngsters at the Knysna Sport School.

Webb, who works in IT infrastructure consultancy and sales, said he already had plans for his long-term investment.

“I suppose the first thing that comes to mind is saving for my two daughters’ tertiary education.”

In an increasingly tough economic climate, he said the investment fit perfectly with his existing portfolio.

“One always feels as though, with inflation, you can never be too confident that you have all your bases covered.”

“It was also imperative for us to give back to the community in the region.”

As a sponsor of professional mountain biking, Van Niekerk said it was appropriate to support an initiative that developed future sporting talent.

“Naturally, RE:CM has an objective of not only sponsoring the race to build brand awareness, but to turn that awareness into interest.

“As such, offering a prize that directly relates to our business was appropriate.”

He said Webb could select one of four local unit trusts offered by the Cape Town-based independent asset management company, depending on his personal investment requirements and risk considerations.

Van Niekerk said the company saw great synergies between the sport and investing.

“Both show us what perseverance in the face of adversity can achieve.

“It’s about enjoying the ride and having the patience to stay the course when the end may not always be in sight but does guarantee to be favourable.”

“Every year, we try to innovate as much as possible and great initiatives like this make our event special.”

The third edition of the race was won by the sponsor’s own pairing of Waylon Woolcock and Lourens Luus.

For more information on the 2014 event, visit www.recmknysna200.co.za.
Follow Garden Route Events on Facebook or go to @gardenroutelive. 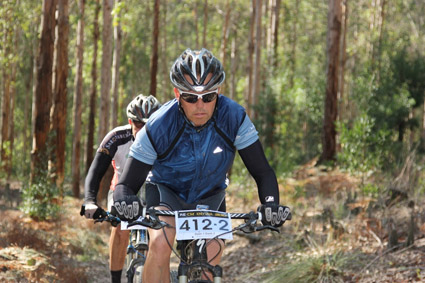 Amateur mountain biker Digby Webb (pictured) walked away a winner at the recent RE:CM Knysna 200 when he won a unit trust investment worth R50 000, courtesy of the title sponsor.