The University Sports South Africa event, presented by Bestmed, starts on June 25 with the mountain bike events and the opening stage of the three-day road tour.

The reigning champion men’s and women’s teams, from the University of Pretoria and the Potchefstroom campus of North-West University respectively, will return to defend their titles against some of the country’s top up-and-coming talent.

According to NMMU’s cycling manager Theresa Le Roux, this will be only the second time that the university has hosted the event. The last occasion was in 2008, when the host institution also walked away with the overall honours.

Spearheading the Shukuma-NMMU attack this year will be former national downhill racer and team captain Wesley Augustyn, who is also the brother of international pro John-Lee.

“The top rider at the champs this year will definitely be Timo Cooper from the Cape Peninsula University of Technology, who is currently one of the top mountain bike racers in South Africa,” said Le Roux.

Le Roux said the road programme would kick off at 9am on the Wednesday morning with an 84.4km stage for the men and 62.2km for the women from Altona Primary School.

This would be followed at 2pm by a 10km time-trial opposite the back entrance of the university on Marine Drive.

“Thursday morning it’s a 120km stage for the men and 90km for the women, starting at 9am on our South Campus.”

The racing finishes on Friday with a 2.4km hill climb on the corner of Seaview and Link Roads in the morning and a criterium race on campus in the afternoon.

“There will be the traditional yellow for the overall leaders, polka dot for the hill climb and green for the sprint.”

For route information, visit www.nmmu.ac.za and follow the sports links to the cycling club’s home page. 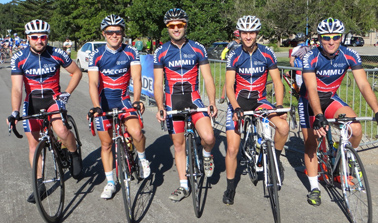