The Shukuma-NMMU squad will be aiming to add a second victory to their name when they host the Bestmed University Sport South Africa cycling championships in Port Elizabeth next week.

The event starts with the mountain bike discipline on Tuesday, June 25, followed by the three-day road tour from Wednesday.

Although not the defending champions – that honour belongs to the University of Pretoria – the local team set a winning precedent when they last hosted the championships five years ago.

Team captain Wesley Augustyn, who was part of 2008’s victorious squad, said their main focus would be on winning the overall team classification. “But an individual overall win will also be in the back of the riders’ minds,” he admitted.

“I would say that we are probably stronger as a team than we were in 2008, but the competition has become tougher and more pro riders are competing.”

The team will be without the services of Sean Bos, who broke his collarbone in a crash during a training camp in Franschhoek last week.

Augustyn said Nel, who hails from Graaff-Reinet, was on his best form again after battling heart problems over the past few years.

“He is ready and fit. Gerrit is a very good all-round rider with a high pain threshold and the ability to outperform his rivals when it counts most.

“He also has a big influence on the team as he brings a lot of experience from racing as a youngster in Belgium.”

Fellow all-rounder Prinsloo would provide the second prong of their attack, said Augustyn.

“Marinus is on top form after competing at the SA track champs in Cape Town a month ago. He has the leg speed for those fast stages and sprint finishes.

“He can also climb very well and plays an important role in ensuring that we don’t lose time on the hills and in the time-trials.”

As the oldest tour rider, 24-year-old Augustyn said his own role would be to act as mentor and strategist for the team.

“I have a lot of experience in ‘reading’ races, which could help the team to reach the top three.

“My ambition is to go into the tour to make the right choices on the road and to motivate the younger riders. I will definitely sacrifice myself for the team and make sure we are a big contender for the overall classification.”

The part-time business management student said competing in front of their home crowd would certainly have a special effect on the team’s performance. “A person always gives that extra bit in front of your supporters.”

According to Augustyn, the first stage would already separate the main contenders from the rest. “The tour will be aggressive racing from start to finish due to the calibre of the riders.”

It starts with an 84.4km stage from Altona Primary School on Wednesday morning, followed by a 10km time-trial on Marine Drive in the afternoon.

On Thursday, racing continues with a 120km stage from NMMU South Campus. The tour finishes with a 2.4km hill climb and criterium race on Friday.

Augustyn, a former national downhill racer, said it would be important to make their mark early on in the five-stage event after missing a podium spot by a matter of seconds at last year’s championships in Wellington.

Matthew Hayter will represent Shukuma-NMMU in the 40km mountain bike race at Hopewell, where Cape Peninsula Institute of Technology’s Timo Cooper will attempt to retain the title for the institution in the absence of defending champion Charles Keey.

“Timo is a massive talent and a great guy so that makes him a respected rider,” said Augustyn. “He can climb comfortably with the top riders in South Africa and this race has a lot of climbs, which will suit him.

“But Matthew has been getting a lot of solid results on the circuit and knows what he needs to do.” 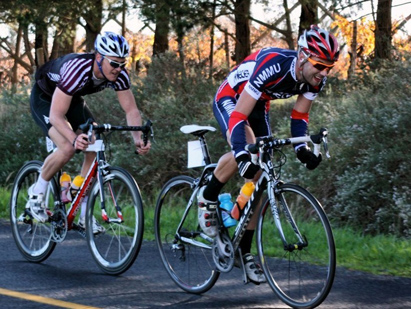 Shukuma-NMMU captain Wesley Augustyn (right) will lead his team at the Bestmed USSA Cycling championships in Port Elizabeth from June 25 to 28.