Waylon Woolcock and national marathon series champion Lourens Luus struck the first blow in what is expected to be an epic duel with Kevin Evans and Brandon Stewart on the opening stage of the three-day RE:CM Knysna 200 on Friday.

The duo, riding in the colours of RE:CM, outsprinted the FedGroup-Itec riders to take the 77km stage by one second in 2:59:18 in a dramatic showdown on Thesen Islands.

The Bridge pairing of Nico Pfitzenmaier and Timo Cooper finished a distant third in 3:07:41.

Woolcock said it was an important race for his team and that he and Luus were pleased to have won a stage in an event backed by their employer. “We’d obviously like to take the overall win for them too.”

Another of the pre-race favourites, the RE:CM Rowers, dropped out of contention quite spectacularly when Olympic gold medallist Matthew Brittain, fourth in the recent opening race of the Nissan TrailSeeker series, rode into a cow as he and his dairy farmer partner Rob Dormehl were attempting to pass a herd.

“It was quite a small cow but I was going pretty fast. It must be feeling quite sore,” he laughed.

The top three teams went hard from the start at the Knysna Elephant Park, with Luus setting up the attack on the first climb of the day just 5km in.

“We’d warmed up pretty well, so we thought we’d take a gamble and hit it early,” said Woolcock. “The sooner we could put damage into the guys the better.”

Cooper was an early victim, dropping off the pace on the ascent. Although he and his German partner chased hard on the descent, they were unable to rejoin the leaders.

Evans and Stewart stayed on the RE:CM duo’s wheel on the next long climb out of the forest and through the first waterpoint at Packwood Country Estate after 28km.

“We knew we needed to be in the single tracks first because Brandon and Kevin are pretty quick,” said Woolcock.

By the second waterpoint, on the dirt road before Petrus se Brand at 53km, Woolcock and Luus realised they would not be able to shake their rivals and that a sprint was inevitable.

“Coming into the finish, we knew we had to be first into the corners and just spread ourselves out and take it from the front. We would have liked to have gotten a little more time on them but there are still two days to go.”

He said the 68km second stage, which features 1 620m of climbing, would be particularly challenging.

“I won’t lie when I say that the legs are feeling the half-dozen stage races we’ve done this year.

“We’re not leading by much so the best form of defence will be offence. Better to be at the front and attack on the climbs than be attacked.”

Howard-Chamberlain’s Heletje van Staden and Nicci Grobler won the opening stage of the women’s race in 4:03:10, while Annari and Philip Jordaan of Mixed Emotions opened the scoring in the mixed category in 4:04:07.

In another triumph for RE:CM, Cape Epic mixed category champion Erik Kleinhans took the lead in the men’s solo category in 3:07:43. 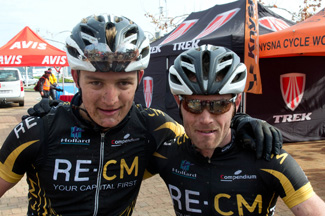