Lady Luck smiled on race leaders Neil MacDonald and Brandon Stewart as mechanical problems beset their nearest challengers on the penultimate stage of the nine-day Old Mutual joBerg2c in KwaZulu-Natal on Friday.

After a rocky start at MacKenzie Club near Ixopo, the FedGroup-Itec riders overcame a number of obstacles on the 102km stage, which included a much-anticipated technical descent into the Umkomaas River Valley.

They cruised alone into the finish at Jolivet Farm in the Highflats region in 4:06:51 (31:08:21) to claim their fourth stage win and consolidate their overnight lead.

They were just under a minute ahead of the luckless RE:CM pairing of Waylon Woolcock and Lourens Luus, who had punctured a front wheel and destroyed a rear en route.

The latter recovered well from these setbacks to finish in 4:07:46 (31:12:44) to hold onto the runner-up spot on the day and the overall standings.

They finished seven minutes clear of Contego’s Kevin van Hoovels and Louis-Bresler Knipe, who limped home with a seized cassette in 4:14:58.

The Bridge duo of Nico Pfitzenmaier and Timo Cooper finished fourth on the day, clocking 4:21:22, and remain third overall (31:50:28).

According to MacDonald, it had been a tough start to the day but they had recovered quickly and came back fighting.

“There were a couple of drags near the beginning and Brandon almost lost his jockey there. Then, on the descent into the valley, the guys were putting pressure on us to go down fast and I crashed twice.”

Knipe, Van Hoovels and Luus were leading the charge towards the valley floor when MacDonald and Pfitzenmaier went down in a crash behind them.

Woolcock, who had been with the fallen riders, seized the opportunity to try and catch the leaders. “I put the hammer down there and maybe overcooked it as I punctured my front wheel.”

After losing valuable time plugging it, Woolcock had to chase to catch his partner, who was unaware of his troubles, and the FedGroup-Itec and Contego teams.

“The guys upfront told Lourens that I’d punctured and he waited for me. From there we just rode at a steady pace because we knew we were far enough ahead of the chasing teams on GC, so we had nothing to gain except a stage win.”

With Stewart driving hard on the climbs out of the valley, Contego eventually dropped off the pace, leaving only RE:CM in hot pursuit.

By the third waterpoint at the 83km mark just outside Highflats, Woolcock and Luus were about a minute behind Stewart and MacDonald.

“As we came out of the tree line about 10km from Jolivet, I could see FedGroup-Itec. They were no more than 30 seconds ahead of us and I knew there was a chance that we could catch them.”

Then disaster struck as a stick got lodged in Woolcock’s back wheel and destroyed four or five spokes.

“We just limped down the hill. There wasn’t much I could do.

“I couldn’t put power on the wheel as it could collapse completely and end my race.”

MacDonald said the racing had been close and that the pressure had been on from the start.

“An unassailable lead? I never say that. But we didn’t push too hard today because we knew we had a good lead.”

Erik and Ariane Kleinhans continued their domination of the mixed category and are seventh in the general classification.

The Kleinhans’s hold a 26-minute lead over closest rivals Catherine Williamson and Jarryd Haley of bizhub-Rocky Mountain, who finished third on the day in 4:41:26 (33:48:17).

The fast and furious 75km final stage of the 910km race finishes at Scottburgh main beach on Saturday. 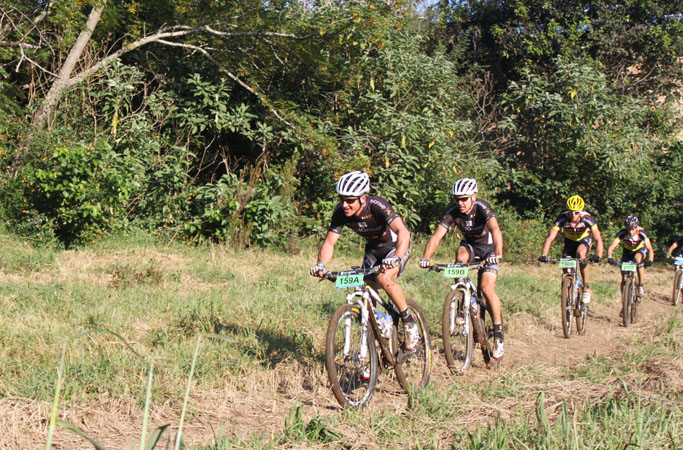