The FedGroup-Itec riders completed the 910km journey from Heidelberg in Gauteng to the KwaZulu-Natal south coast in 34:11:05, taking four stage wins in the process.

They finished 11 minutes clear of MacDonald’s former team-mate Waylon Woolcock, with whom he won the 2011 event, and Lourens Luus of RE:CM (34:22:21).

Woolcock and Luus, who had been trailing by four-and-a-half minutes at the start of the 86km final stage, suffered mechanical problems that put paid to their title chances.

Bridge duo Timo Cooper and Nico Pfitzenmaier, who completed the final stage sixth in 3:12:29, rounded out the podium with an aggregate time of 35:02:57.

First on the final day was the Contego pairing of Louis-Bresler Knipe and Belgian team-mate Kevin van Hoovels, who powered their way along the edge of the Indian Ocean to claim their third stage win in 3:02:09.

They finished a respectable seventh overall in 36:33:50 after dropping out of contention in the earlier stages due to illness.

MacDonald and Stewart finished the ninth stage second in 3:02:44, with Woolcock and Luus following them home in 3:09:37.

The leaders, driven by Van Hoovels, had set a blistering pace throughout the stage that descended through the sugarcane fields towards the beach.

Despite this, the top contenders were all together at the first waterpoint around 39km after the start at Jolivet in the Highflats region.

Then, 6km further on, Woolcock suffered a chain break, which forced RE:CM to chase hard as Contego, FedGroup-Itec and Bridge forged ahead.

On the steep Work to be Done climb in the Vernon Crookes Nature Reserve, Contego and FedGroup-Itec pulled clear and stayed away to the finish.

MacDonald, who was also runner-up last year alongside Woolcock, said the race held a very special place in his heart.

“Coming into a new team and getting the results that I have this season, you don’t get that often. So I’m very happy with the way things have turned out.”

An emotional Stewart said it was one of the biggest wins of his career. “I don’t think people realise how much you have to fight in your everyday life for this, but I’m very chuffed.”

Erik Kleinhans received a fitting birthday present when he and his Swiss wife Ariane finished the trek in 36:38:55 to take the mixed category win for a third year in a row and eighth overall.

The on-form RE:CM duo crossed the line first in 3:17:08 to put the seal on an unbroken series of stage wins en route to victory.

Fischer-BMC’s Jane Nüssli and Yves Corminboeuf followed them home in 3:24:42 to complete the mixed podium in 37:36:26.

“I can’t believe the mixed racing has been so close. Our bodies were quite tired, so we had to dig a little deeper than we’re used to.”

Stopforth said the race was getting tougher every year. “It’s really nice to see the ladies upping their game.” 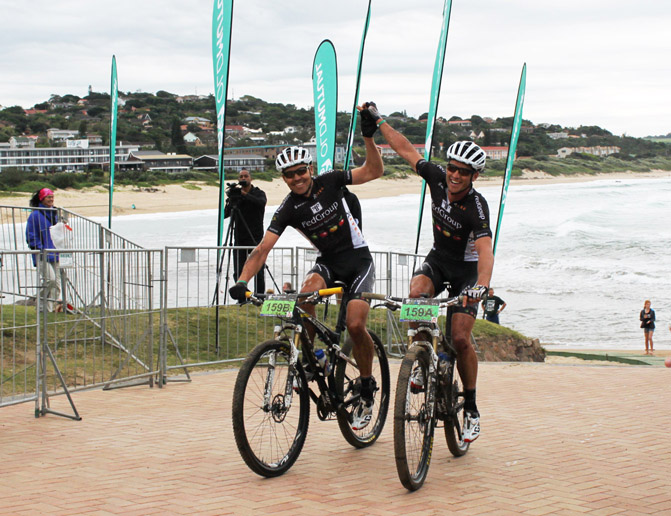 FedGroup-Itec’s Neil MacDonald (left) and Brandon Stewart celebrate their victory in this year’s Old Mutual joBerg2c. The nine-day mountain bike race started in Heidelberg, Gauteng, on April 26 and finished at Scottburgh on the KwaZulu-Natal south coast on Saturday. 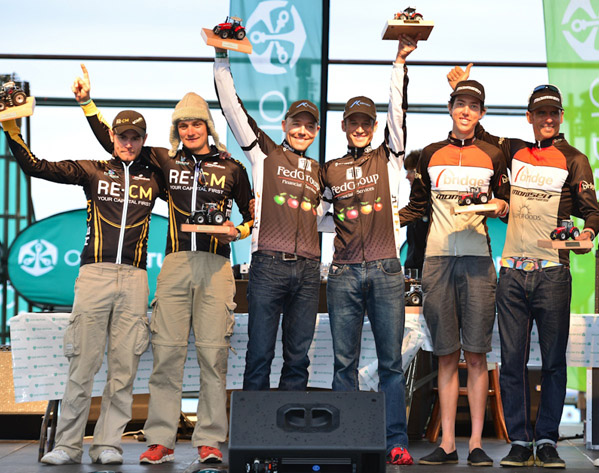