Olympic rowing champion Matthew Brittain will have no shortage of new friends when he and his fellow mountain bikers take to the Vaal Dam for the dragon boat crossing on the opening stage of the Old Mutual joBerg2c on Friday.

Brittain, who was a member of South Africa’s gold medal winning lightweight coxless fours in London last year, will team up with another former national rower, Rob Dormehl, for the nine-day stage race.

The 25-year-old Olympian, who is riding under the colours of Avis Van Rental, said he was raring to go following a successful racing debut at the recent Absa Cape Epic.

He finished 27th overall in the general classification alongside another member of the “oarsome foursome” James Thompson.

“We were trying to win so we didn’t do as well as we had hoped – those guys are fast,” said Brittain.

“The Epic is a suffer fest and a slog. I said I would never do it again, but as the memory fades I want to do it again a bit more every day.”

He therefore jumped at the opportunity to join Dormehl on the Old Mutual joBerg2c. Starting near Heidelberg in Gauteng and finishing at Scottburgh on the KwaZulu-Natal coast, it is the country’s longest fully serviced stage race.

“I am quite excited to be riding with Rob but, to be honest, I’m more nervous than anything because he is a really fast rider and a tough and competitive athlete; I hope I don’t slow him down too much.”

Dormehl, who also represented South Africa in the lightweight fours a decade ago, is now an experienced mountain biker, trail builder and dairy farmer.

“He spends a lot of time making cool trails on his farm just outside Sedgefield, and even more time riding them,” said Brittain. “He’s very knowledgeable and I’m lucky to have a partner with his skills.”

Brittain, who lives in Centurion in Pretoria, said he would not be aiming for a particular result in the 910km race as it would make him too nervous.

“I prefer to go as hard as I can and see where it gets me. The best result is just a symptom of the best race we can produce, so we will focus on that.”

He said he sustained a back injury before Epic, which prevented him from training until two weeks before the race.

“So I was well rested! I’ve tried to approach joBerg2c with a more professional approach and have definitely done some good miles but a slight hamstring injury did put a spanner in the works training-wise.”

Although Brittain is on the road to recovery, the injuries have put him out of contention for the world rowing championships in August and any other rowing events this season.

“Instead, I will be crushing the mountain bike until my spine is back in the game. A new challenge is a good challenge.”

He said cycling was the ideal complement to his rowing training.

“It helps my rowing a lot in that it is very low load on the joints and body per pedal stroke, so it’s an easy way to get in some extra endurance training without the power requirements and associated stress of rowing.”

As an oarsman, Brittain said he was also used to getting up early day after day and pushing himself to the limit.

“Our rowing team is truly inspirational; we train every session together and motivate and push each other every day. In cycling, I can’t believe how people train apart and then come together for racing!

“I’ve struggled to train with the consistency and motivation I have in the boat but it has been fun nevertheless and I have met tons of awesome people.” 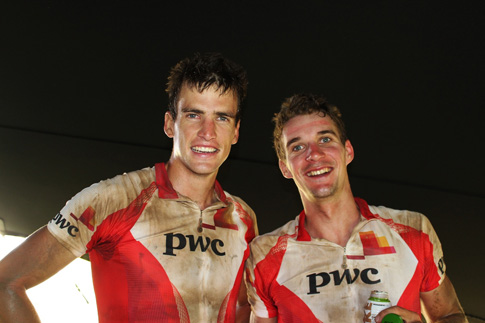