Participants in next month’s Nedbank sani2c mountain bike race will be the first in the world to ride a breaking wave when they pedal across the new Nedbank 360Life bridge at Scottburgh on the KwaZulu-Natal coast.

The three-day race, which is presented by Nedbank Private Wealth, will see 4 500 riders pedal 200 metres into the Indian Ocean before crossing the finish line on the town’s main beach.

According to organiser Glen Haw, the Candock system marked the culmination of a series of world-first floating bridges, which included the introduction of the first ever stillwater bridge in a stage race in 2007.

“We have wanted to build a floating bridge out to sea for a number of years,” said Haw.

“Initially, we came up with a cumbersome system that required barges and a tug boat. The cost literally blew that idea out of the water.”

He said the modular system, which was traditionally used for floating docks and pontoons, had provided a cost-effective and workable solution.

“Riders will effectively complete the final kilometre of the 260-kilometre route on water.”

The bridge includes 600 metres of lagoon riding before competitors cross the sand and take to the waves for the final 200-metre stretch.

“It will be a huge climax, after an already fantastic experience, for all our riders across the Race, Trail and Adventure events.

“It’s something you just can’t miss. Riding a breaking wave on a bicycle is a massive adrenalin rush that makes any other type of wave surfing look boring.”

He said lifeguards would be on hand to ensure the safety of participants.

“This is not going to be a straightforward bridge – it’s filled with challenges, ups and downs, and twists and turns. There’s a very narrow margin for error.”

Haw said creating talking points such as this was an essential ingredient in building excitement around the world’s largest fully serviced stage race.

“People say we’re a little nuts but they said the same thing when we brought in our first steel-and-pipe floating bridge over the Mossbank Dam (on the first stage) seven years ago.”

The 80-metre curved floating bridge now is the highlight of day one, while the floating cable bridge over the Umkomaas River is a challenging feature on stage two.

“Riding the lagoon and sea provides a fitting end to the journey. By combining arguably the longest floating bridge and a world-first cycle on the ocean, we trust riders will appreciate the best of nature and innovation combined.”

The Nedbank sani2c Trail starts in Underberg on May 14, with the Race and Adventure following at one-day intervals. 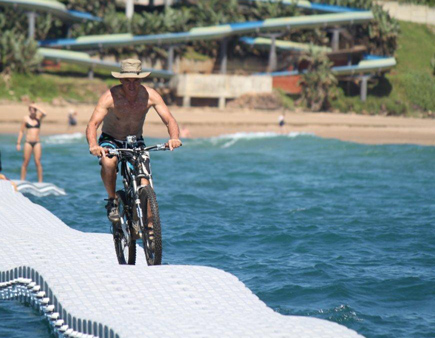 Nedbank sani2c organiser Glen Haw tests out the new Nedbank 360Life bridge, which riders will cross on day three of the mountain bike stage race en route to the finish line at Scottburgh. The event starts in Underberg on May 14. Photo: Supplied