The Investec Night Relay has not only cultivated team spirit among local businesspeople, it is providing impoverished youth with an avenue to rise above their circumstances.


A group of youngsters from the ArtWorks for Youth project in the metro’s Joe Slovo township has shown what impact the fun relay can have on the local community.

Despite trying circumstances, they have taken up the challenge of the 21km event around the North End Lake in Port Elizabeth.

They competed in the first two legs in March and April and will again be under starter’s orders at the final race on Thursday, May 2.

Executive director of ArtWorks for Youth, New Yorker John Lombardo, said although the initiative was aimed at providing free visual art instruction, academic support and mentoring, they also encouraged the youngsters to participate in other activities.

“We help a few students who are involved in martial arts, and have several interested in running. It is a way to get them out of the house, meet new people and, of course, exercise.”

The Herald Citizen of the Year finalist added he was a keen runner himself and that the Investec Night Relay series was a great way of combining his interest in the sport with the youth project.

“The relays are so well run and I am always looking forward to it. I often tell my students about the races and now we have about 10 who we rotate for the various running events in PE.”

He explained that there was not much to do in the areas where the pupils lived and therefore a great need existed for activities in and around the Bay.

“There are some sport programmes but they come with a cost and aren’t always well organised.”

Aside from art instruction and extra classes in maths, reading, and writing, the project also has a feeding programme that benefits the pupils.

“We have been working in PE for a decade but moved to a full-time programme here in 2009,” said Lombardo.

He added that running did come at a cost and that he was looking for sponsors for running shoes for the young athletes.

“Many of them are running in school shoes or barefoot.”

Event organiser Michael Zoetmulder of Zports said he was seeing a new trend emerging within the series.

“More businesses are supporting the various causes they hold dear and, in doing so, are giving those who might not have been able to participate the opportunity to do so.”

He said feedback from the ArtWorks for Youth youngsters had been “fantastic”.

Zoetmulder said the final race is always a bumper one and could attract more than 100 teams. “It has been a huge success this year and the vibe has been super.”

He said the team to watch would be current leaders and defending champions, Gamble Pharmacy. They broke the 2012 course record at the series opener in March and improved on it last month.

Participants stand a chance to win lucky draw prizes and can sample live entertainment, food stalls and the beer garden. 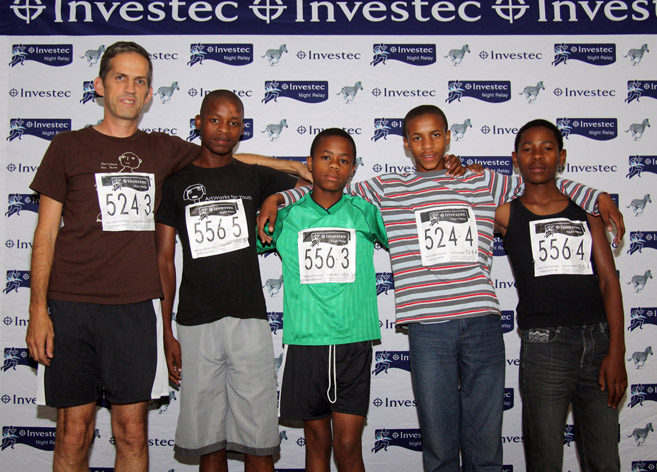 New Yorker John Lombardo, who runs the ArtWorks for Youth project in the metro, with, from left, Vusumzi Gaiza, Sibusiso Macamba, Likhaya Rooi and Ayabonga Quluba after the second leg of the Investec Night Relay in Port Elizabeth.