Brandon Stewart and Neil MacDonald of FedGroup-Itec fired the opening salvo as the racing proper got under way on the second stage of the nine-day Old Mutual joBerg2c mountain bike race on Saturday.

As the rest of the country enjoyed the Freedom Day celebrations, it was business as usual for the top pro teams as they battled it out all the way along the 93km stage from Frankfort to Reitz in the Free State.

But in the end it was former winner MacDonald and team-mate Stewart who took advantage of their prior route knowledge to steal victory in the finishing sprint.

They crossed the line in 3:11:01, a single second ahead of Lourens Luus and Waylon Woolcock of RE:CM, with Cannondale-Blend’s Charles Keey and Darren Lill rounding out the podium in 3:11:06.

Stewart said he and MacDonald were feeling good despite a tough day in the saddle.

“It was a solid pace out there today and the teams stayed together most of the way. There weren’t many hills but there were lots of fast, flat, draggy sections that made for really hard racing.”

The top five teams, which included Bridge riders Timo Cooper and Nico Pfitzenmaier as well as Contego’s Louis Bresler-Knipe and Kevin van Hoovels, were all together in the last 10km stretch of single track. But it was the FedGroup-Itec pair who took the lead into the final corner to seal their win.

“Neil reminded me where the top of the section was coming and about the grass. We cut the corner, Neil came round me on the outside and just went long,” said Stewart.

“I knew I had to stay on his wheel and come into the corner first and second. It’s pretty difficult to lose it after that.”

The competition was also fierce in the mixed category, with less than half a minute separating the top three teams.

They were followed home by the bizhub-Rocky Mountain pairing of Catherine Williamson and Jarryd Haley in 3:24:41.

The Kleinhans duo, who have dominated both the joBerg2c and Absa Cape Epic events for the past two years, were put under pressure on the first racing stage of the 910km event.

“We knew it was going to be tough because we know the guys and girls and knew what to expect,” said Erik.

The top three teams stayed together all the way, with RE:CM taking the lead into the final single track section.

“Then Jane attacked us but luckily we could counter and just come past her with about a kilometre to go.”

As defending champions and now category leaders, he said all eyes would probably be on them.

“It’s not going to be easy, we’ll definitely have our work cut out for us but that’s nice.”

In the women’s event, Ischen Stopforth and Yolande de Villiers, riding in the sponsor’s colours, notched up the stage win in 3:30:50, with Yolandi du Toit and Nicci Grobler of bizhub claiming the runner-up spot in 3:34:26.

On Sunday, the 125km third stage will see the 700-strong field roll out from the Reitz showgrounds towards Sterkfontein Dam near the KwaZulu-Natal border. 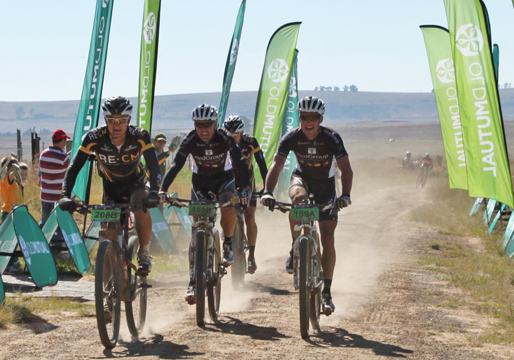