Financial giant Nedbank has confirmed a three-year sponsorship deal with the world’s largest mountain bike stage race, the Nedbank sani2c, which rolls through southern KwaZulu-Natal from May 14.

According to Nedbank Group sponsorship head Andy Scott, the three-day race, presented by Nedbank Private Wealth, was a natural fit for the bank and benefited communities all along its 251km route from Underberg to Scottburgh.

“Like sani2c, Nedbank has a longstanding commitment to sport development and making a positive contribution to the communities in which it operates.

“The event complements the bank’s current involvement in cycling and we are delighted to take the reins from BoE, who sponsored a superb event in 2012.”

“The eco-friendly nature of the race, supported by the tree-planting programme, lends itself to the protection and preservation of the fauna and flora along the route.

In addition, he said the financial backing made available to schools and local community organisations that work on the event are further touchpoints for the title sponsor.

For the 4 500 riders participating in the Trail, Race and Adventure components, the sponsorship makes world-first initiatives like the new 360Life bridge possible.

The floating bridge, one of several innovative water crossings on the route, sees participants riding their bicycles over the Scottburgh lagoon and a few hundred metres into the Indian Ocean before hitting the finish line on the main beach.

The bank has also made free life and disability cover available to all participants for the duration of the event.

Organiser Glen Haw said the race was honoured to be associated with the financial group.

“Officially, this is Nedbank’s first year as title sponsor but, in reality, the organisation has been with us much longer under the BoE banner. We look forward to continuing to build this event together in the future.”

In another cycling-related commitment, Nedbank is also a founding trustee of The Sports Trust, which actively empowers children from underprivileged communities through cycling and other sports.

Over the past seven years, the Trust’s development cycling programme has supported over 700 disadvantaged young cyclists from the Boland and Cape Flats. A number of these have gone on to earn places in the Western Province team and participate in the Cape Argus Pick n Pay Cycle Tour.

The bank also provides hospitality facilities for these development riders, employees and clients, with more than a thousand riders forming part of the Nedbank Green Peloton at the Cycle Tour.

In addition, the almost 500 Nedbank Dream Riders raised over R1 million for children’s charity Reach for a Dream last year. 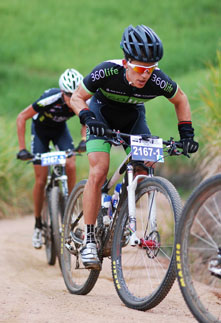