South African long-jump champion Zarck Visser, who successfully defended his title last weekend, will headline the second leg of the Varsity Athletics series in front of his home crowd at the University of Johannesburg on Monday night.

Visser set a personal best of 8.29m, the second biggest leap by a South African, at the senior national champs in Stellenbosch and went on to take the opening event of the student competition at the same venue two days later.

“The first Varsity Athletics meeting was amazing,” said Visser, who is currently ranked number one in the world.

“I was a bit tired after nationals but still jumped okay, which I wouldn’t have been able to do a year ago.”

The third-year transport management student had put in a workmanlike performance at the Coetenzburg stadium to leap 7.81m and take gold for UJ.

Willem Coertzen of Pukke finished second with a distance of 7.51m and Francois Coetzee of Tuks jumped 7.49m to earn bronze.

“I just had to do my job as a team member and get the points for the team,” said Visser.

The long-jump specialist said the 100-minute live television format – in which eight of the top universities vie for the track and field laurels – had helped put athletics back in the spotlight again.

“What I learned from the first event was that it’s a fast-paced competition and you have to be ready and focused – your mind has to be in the game.”

The 23-year-old said there were a number of promising youngsters taking part and he expected the competition to be a lot tougher in the next round at UJ’s Auckland Park Kingsway Campus stadium.

“But I know what the game is now, so I’ll be jumping better at the next one. Now I can hit it hard.”

Visser said six months of intensive speed and strength training had paid off and that he and coach Emmarie Fouché were still working hard at perfecting his technique ahead of the IAAF World Championships in Moscow in August.

“My main goal is to stay injury-free. At world champs anything can happen so I’m going there to give it my all. If I do that, I think I stand a chance of medalling.”

The Welkom-born athlete said the top international competitors would be watching each other’s progress throughout the season and that occupying the top spot on the world rankings put added pressure on him.

“I think being at the top also puts my mind at ease and tells me I can pull off something big. I’m not done yet, I still have a few surprises left.”

When asked whether he had his eye on the SA record of 8.5m held by Olympic silver medallist Godfrey Khotso Mokoena, Visser said his recent successes had given him confidence.

“If you asked me this question last week I think I would have said no, but after last weekend it’s possible. I believe that I can do it but it will take hard work – I don’t expect it on a silver platter.”

The Varsity Athletics series wraps up at the University of Pretoria on April 29. 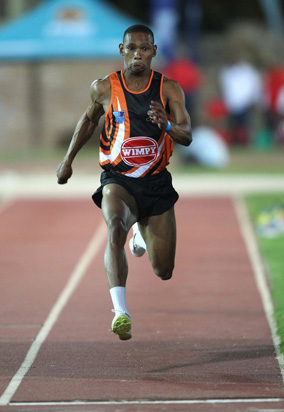