Tasol-GT rider David Maree held his nerve in a three-man sprint to win the Emperors Palace Classic, presented by ASG, in Johannesburg on Sunday to keep his team’s hopes for survival alive.

Maree, whose squad’s title sponsorship expires at the end of the month, crossed the line first in 2:13:26, just a split-second clear of Bonitas’s Chris Jennings, with Westvaal-BMC’s Shaun-Nick Bester a further second back.

According to Maree, the win was a much-needed one, especially ahead of their potential swansong at the Mzansi Tour, which starts on Wednesday.

“We really needed this one for the team’s confidence and to show everyone that we’re not giving up. We’ll keep fighting and keep believing in our dream.”

The Bryanston resident, who also podiumed in the Fast One in January, said the racing started at a furious pace on the fairly flat 104km course.

“No one was giving anyone room to manoeuvre and the bunch didn’t let any moves slip away. It was definitely one of the harder ones this season.”

A group of eight riders – with top teams Bonitas, Westvaal-BMC and Tasol-GT all represented – broke away from the peloton about 30km into the race.

“We actually thought we would stay away but the MTN-Qhubeka feeder team chased us down and closed the gap with 40km to go.”

They then rode together until the closing 10km, when the final selection of five riders went clear.

Jennings launched the first of two attacks with two kilometres remaining, which saw the leaders shed an MTN-Qhubeka and ASG rider, leaving the eventual podium finishers to battle it out for position.

“Chris attacked again with about a kilometre to go, so I let Shaun-Nick close the gap for me and then I had a huge sprint to the finish.”

Describing himself as “an opportunistic sprinter”, the 23-year-old said the final uphill drag to the line had played right into his hands.

“Because I am one of the lighter riders, an uphill sprint like that is really suited to my ability.”

The women’s race also ended in a photo finish with relative newcomer Odelle Joubert, riding in the colours of Complete Cyclist, taking her first major title in 2:33:32.

Allan Britnell and Nicci Grobler won the men’s and women’s sections of the 40km Mountain Bike Classic on Saturday. 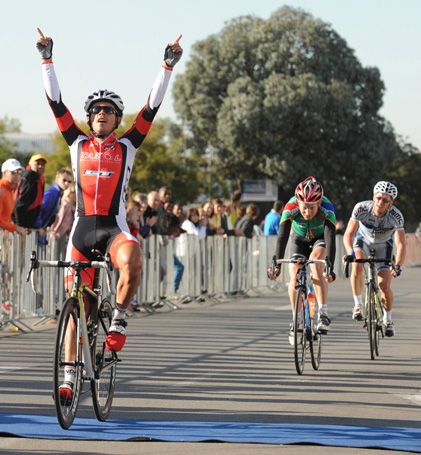 Tasol-GT rider David Maree signals his delight with his win at the Emperors Palace Classic, presented by ASG, in Johannesburg on Sunday. Photo: Peter Morey