The University of Johannesburg is gearing up to host the second leg of the explosive new Varsity Athletics series, which takes place at the UJ Stadium on the Auckland Park Kingsway Campus in Westdene on April 22.

Hot on the heels of the successful Varsity Sevens and Varsity Beach Volleyball tournaments, this made-for-television format will see 208 athletes from the eight top athletic universities compete for glory during the 100-minute broadcast.

According to local organising committee chairman Francois Fouché, the televised nature of the three-leg series – which was inspired by the Varsity Cup rugby concept – makes for action-packed, adrenalin-pumping viewing.

“This will be one of the few times in the past 20 years that South African audiences will be able to enjoy athletics live on TV.”

“The UJ event promises a great atmosphere and solid performances on one of the best blue tartan tracks in the country.”

He said the athlete to watch would be the university’s own long-jump sensation Zarck Visser, who currently occupies the top spot on the world rankings with a distance of 8.19m. He also finished second at last year’s African championships.

Based on their performances, Fouché said the competition would provide an opportunity for students to qualify for places in national teams.

“The most notable change from a regular meet is that field athletes will only have four attempts instead of six to fit all the events into the allotted time frame.”

He said each team comprised 13 male and 13 female athletes, who would compete in a total of 18 events.

“Points are awarded for each event and the team with the most points collectively will be named the winner on the night.”

The institutions would then be awarded points based on their overall standings, which would be carried over to the next meeting, said Fouché.

“The university with the most points after the three meetings will then be crowned the best athletic university team in the country.”

The series, which kicked off in Stellenbosch on April 15, finishes in Pretoria on April 29.

This will be followed by an inter-residence student relay before the main event, which will be broadcast live on Supersport from 7pm.

Tickets cost R10 and are available at the gate from 4.30pm.

There will be no road closures and parking is available on campus and at the Westdene Community Centre. 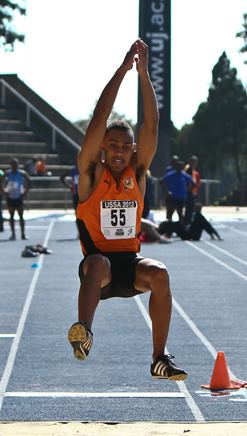 South Africa’s top student athletes will be in action during the second leg of the explosive new Varsity Athletics series, which takes place at the University of Johannesburg Stadium on the Auckland Park Kingsway Campus in Westdene on April 22. Photo: Eon Botha