It was a clean sweep for MTN-Qhubeka on the opening stage of the Bestmed Tour de Boland, presented by ASG, near Stellenbosch on Tuesday.

Australian Nicholas Dougall clocked the fastest time in the 14km individual time trial, which saw riders battle headwinds all the way from the Allée Bleue wine estate up the Helshoogte pass to the hilltop finish at African Valley Estate.

He crossed the line in 20 minutes 17.3 seconds, a full 50 seconds clear of team-mate JC Nel, who recorded 21 minutes 7.1 seconds. Till Drobisch rounded out the podium for the Potchefstroom-based squad in 21 minutes 45.5 seconds.

Dougall said riding the course earlier in the day had been critical to his team’s success and allowed him to gauge his pace correctly.

“It was a very tough course. With the two climbs being at the end, you didn’t want to go out too hard.

“I paced it fairly well and when I got to the bottom of the first climb I was feeling good and started picking it up towards the end from there.”

He said he caught his one-minute man on the flat section halfway through the stage, and passed a second rider on the first climb.

“When I got halfway up that climb I was feeling good but it’s very difficult to judge and you never really know until you see the results at the end.”

The 20-year-old said the win had come as a surprise to him, following a poor showing at the national road championships last weekend.

“My form hasn’t been that great but I thought I’d just go out there today, give it 100% and see what happens.”

“The team is very strong at the moment and we now essentially have three cards to play.”

Dougall said Thursday’s 140km road race would be the decisive stage. “We can now afford to race aggressively, not just sit back and wait.”

He said the presence of world-class sprinters like Tasol-GT’s Nolan Hoffman would certainly influence their strategy. “We certainly don’t want to take them to the line.”

The Brisbane native said he hoped to help seal the overall victory for his team in the criterium on the fourth and final stage. “There are a lot of criteriums on the Australian circuit, so I’m used to them.”

Dougall said a strong showing in the tour would boost their confidence ahead of the Cape Argus Pick n Pay Cycle Tour in Cape Town on Sunday. 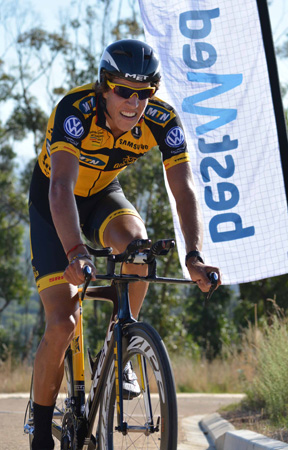 MTN-Qhubeka’s Nicholas Dougall from Brisbane in Australia took the yellow jersey with a fine time-trial victory in the first stage of the Bestmed Tour de Boland just outside Stellenbosch on Tuesday. Photo: Coetzee Gouws/Fullstop