It will be the clash of the future champions when international star Nolan Hoffman leads the invitational Boland ASG junior team against a strong World Cycling Centre Africa (WCCA) contingent at the Bestmed Tour de Boland from Tuesday.

The Franschhoek-based sprinter, who returned from the UCI World Track Championships at the end of February, will mentor the five youngsters from Wellington during the four-day tour, which is presented by ASG.

“I’m looking for a win and at the same time to help the young riders,” said Hoffman, who usually rides in the colours of Tasol-GT.

“We have a lot of talent in SA. The only way to improve as a rider is in races and we need the longer tours to become internationally competitive.”

His squad will face off against three WCCA teams, featuring six members of the MTN-Qhubeka feeder team, including JC Nel (South Africa), Getachew Yohans (Ethiopia) and Till Drobisch (Namibia).

The MTN-Qhubeka development outfit is looking strong following their victory in the team time-trial event at the national road championships this past weekend.

According to WCCA director JP van Zyl, Nel and Drobisch were expected to lead the charge in the individual (stage one) and team time-trial (stage two), while Calvin Benecke and Emile Jacobs were the strongest hopefuls for the road race (stage three) and criterium (stage four).

“The tour is well balanced in its challenges and is one of our major goal races,” said Van Zyl. “It can be viewed as a talent identification tour, where we will see who will become the big names of the near future.”

The former Olympian said the purpose of the Potchefstroom-based centre was to develop African talent and prepare young riders to race internationally at a professional level.

“There aren’t many tours in South Africa, or Africa for that matter. Road racing needs more competitive events and it is our duty to support those that make the opportunities available. We are proud and honoured to be competing.”

Van Zyl said the tour had all the elements to become a major event on the international calendar including beautiful scenery, good weather and mountainous terrain to promote challenging racing.

The daily stages start and finish at the Allée Bleue wine estate, which is equidistant from Franschhoek, Stellenbosch and Paarl.

The event wraps up on Friday with a 40km fun ride through the winelands, which includes a complimentary pancake and coffee stop in Franschhoek. All finishers will receive a stemmed Allée Bleue glass filled with the wine of their choice. 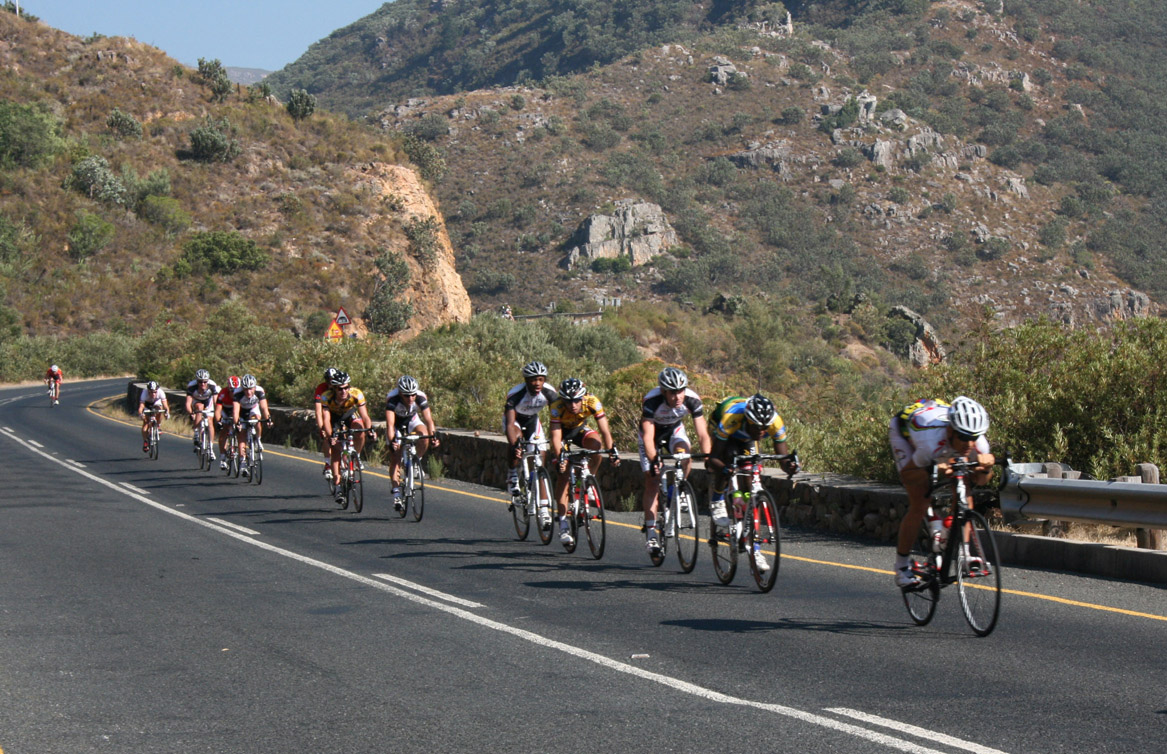 A group of riders on a descent in a previous edition of the four-day Bestmed Tour de Boland, presented by ASG, which starts at the Allée Bleue wine estate near Franschhoek on Tuesday. Photo: Supplied