The University of Johannesburg has appointed geneticist Dr Charlotte Scholtz as netball manager following a yearlong search for the right candidate to head up this high performance sports club.

Scholtz, who is well known in netball circles, was both Team South Africa manager and on the organising committee for the inaugural World University Netball Championships, which were held in Cape Town in July.

According to UJ’s director of sport Sanpat Coetzee, netball is the most popular activity among female students and a flagship sport across all four campuses.

The university finished third in this year’s University Sport South Africa tournament, topped the log in the Eastern Gauteng A and B leagues, and will be looking to compete seriously when the new Varsity Sports tournament rolls out next year.

“Netball is one of UJ’s high profile sporting codes, therefore we scanned the market for a suitably qualified and experienced specialist who can work with students and has a passion for the sport.”

She said the institution had looked for an innovative, self-disciplined and hard-working leader. “Charlotte personifies all of these criteria and is also a team player.”

As a provincial player, umpire, coach, selector and administrator, the 38-year-old brings experience in every aspect of the game to her new role.

Scholtz, who is currently the national U21 assistant coach, will be responsible for the recruitment and development of top student-athletes and coaching staff, as well as creating opportunities for participation at recreational and competitive levels on all campuses.

Coetzee said one of the club’s medium-term goals was the identification and development of talent in the greater Soweto area. “This programme is based at the UJ Soweto campus.”

The appointment marks a complete career change for the Capetonian, who is a founder member of Genecare Molecular Genetics and currently heads up a pharmacogenetics unit for a company in the private sector.

“My most important aim has always been to bring about positive change. I am a firm believer that education can empower and free you from your circumstances and, with UJ’s backing, I would potentially be able to assist so many more women.”

While Scholtz believes that she can make a real difference through netball, she said sport was not an excuse to bypass education.

“Given the lifespan of a successful sporting career, a good education can only benefit an individual in the long run.”

She said she would apply her scientific background in bringing a more strategic, analytical and data-driven approach to the support offered by UJ in order to enhance players’ performance. 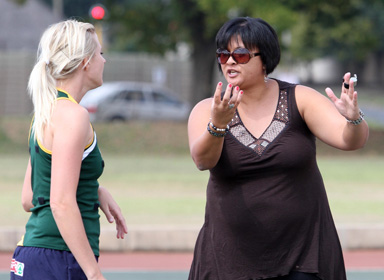