The 97km event, which is presented by ASG Events, rolls out from Silverstar Casino in Muldersdrift on February 9. “It’s perfectly placed on the calendar as it gives riders a full month to recover for the Cycle Tour,” said race organiser Wynand de Villiers.

“We’re really chuffed to have been awarded this honour. It’s taken many years of hard work.”

De Villiers, who has run the event for the past four years, said it was an especially proud moment for race founder Wouter van Wyk, who started it as a fundraiser for his Weltevreden Hervormde Kerk congregation.

“The race has grown from 1 100 to 2 500 riders since we took it over. We naturally expect many more participants now that it is officially a seeding event.”

With four big climbs en route, the 14th edition of the Berge en Dale certainly lived up to its name and would be a fantastic fitness barometer, said De Villiers.

“Strong climbers usually come to the fore on the undulating course. Of all the big races leading up to the tour, I believe it’s the closest in terms of difficulty.”

De Villiers said the route began with the well-known Hillsnacks ascent, which used to be a category four climb in the Rapport Tour. “It’s a six-kilometre monster with a seven per cent gradient.

“The final climb back to the R28 doesn’t have a name, but it’s a backbreaker with just 10 kilometres to go.”

And just when they thought the worst was over, he said riders encountered the sting in the tail. “The short uphill drag along the highway to the finish is pure torture after 97 kilometres of hard riding.”

But those were the only perils to worry about, said De Villiers. “The surface is good throughout and the roads are nice and quiet.

“We get a lot of assistance from Mogale City traffic officers and the race therefore has a reputation for being one of the safest in Gauteng.”

This year’s event was won by MTN-Qhubeka’s Reinardt Janse van Rensburg, who went on to a superb international season that included victory in the Cycle Tour. Anriette Schoeman took the elite women’s title for bizhub-FCF.

De Villiers said the Cansa Powerade Lost City Cycle Classic was the only other event to gain seeding status. “They do great things for the Cancer Association, so I’m thrilled for them.”

Enter the main event or 55km option online at www.cyclelab.com before January 28. 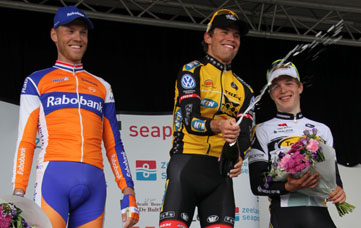