In April, Ralph finished second at the Absa Cape Epic alongside German partner Nina Gässler in the colours of Biogen-Britehouse. Then, in May, she teamed up with Karien van Jaarsveld as DisChem-Britehouse-MTN to place third at the sani2c, presented by BoE Private Clients.

In between, she scored back-to-back victories in the MTN National MTB Series at Clarens and Mabalingwe.

Ralph started off her season as runner-up to Ariane Kleinhans in the UCI Marathon World Cup opener at Sabie to gualify for October’s world championships in Ornans, France.

“That’s a definite goal,” says the former World Student Games representative, who missed out on qualifying for the Olympics in the 200m backstroke by 0.1 seconds.

“I think anyone with a sporting background has that drive to do well in whatever they do.”

The 37-year-old has only been mountain biking for two-and-a-half years, but has already established herself at the top of her game.

What makes Ralph’s achievements so remarkable is that she has competed successfully at a professional level while holding down a full-time job as an IT specialist at a well-known bank.

“I do stress tests on the applications, so I’m deskbound and coding most of the day.”

The busy mother of two is up at 4am every morning to ride and does cross-training in her lunch hour.

“It goes like that day after day after day. It’s busy and you’ve got to have a support base, otherwise it’s impossible.”

Ralph says her husband, Jonathan, and “the grannies” have been a great help with her six-year-old son and seven-year-old daughter.

“All my leave is put into mountain bike races, which is also a little hectic on the family.”

The Bryanston resident says she would love to give it her all and compete as a professional, but that depended on sponsorships.

Ralph was first inspired to train seriously after her brother completed the 2009 Epic.

“A year later, my husband got an entry. He didn’t know who he was going to partner at first and then he made up his mind it was going to be me.

“So I started training six months before the event. It was my first time competing on a mountain bike and we came ninth in the mixed.”

Seemingly a fast learner, she went on to take the overall win in the Nissan series that same season.

Late last year Ralph was approached by Biogen and Britehouse. “They phoned me up and said, ‘Do you want to race Epic seriously?’”

The sponsors had lined up German semi-pro rider Gässler as her partner. “I said yes and trained my heart out because Nina is ranked 17th in the world.”

As the 2004 world rowing champion in the lightweight single skulls, Gässler shares Ralph’s watersport background. The former is also a three-time winner of the Norwegian national marathon series.

“Nina’s a lot better than me on the technical stuff. In the race, I’d climb better than her and then she’d catch me on the downhills, so we had a good system going in terms of our strengths and weaknesses.

“She knew all the European girls on the start list. She said if we podiumed a few of the days and got an overall third we could be ecstatic.”

The duo achieved much more than that and placed second on all the stages, bar one in which they had a mechanical, to finish runners-up (39:23:38) behind Wheels4Life’s Esther Süss, from Switzerland, and Sally Bigham, from Britain (38:34:11).

Ralph and Gässler were 32nd in the general classification in a strong international field of 700 teams.

Following the German’s return to Norway, where she is based, Ralph teamed up with MTN-Qhubeka’s Van Jaarsveld for the BoE sani2c.

The pair won the opening and closing stages of the three-day race, but a broken derailleur on day two cost them almost an hour and crushed their hopes of overall victory. They eventually finished third.

And her sporting ambitions don’t end there either. “I’d love to do triathlon. But maybe later.” 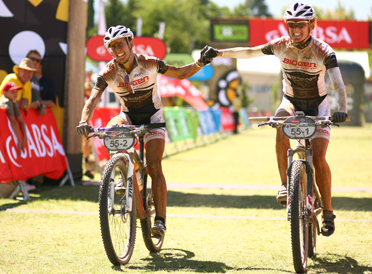