The annual Spec-Savers Ironman South Africa in Port Elizabeth is a punishing test of endurance that pushes participants to their physical and mental limits as they take on a 3.8km ocean swim, 180.2km cycle and 42.2km run.

As if these challenges aren’t enough, this year’s event on April 22 was compounded by atrocious weather conditions that saw weary competitors drenched by heavy downpours and battered by 80km/h gusts of wind.

Now imagine running that gauntlet, desperate to make the same rigorous cut-off time as everyone else, while harnessed to a kayak or pushing a 15kg trike with a precious 30kg cargo on board.

Then you’ll have some sort of inkling what it’s like to be a member of the mind-blowing Team Garwood.

Father-and-son duo Kevin, 49, and Nicholas, 14, share a strong bond forged in part through a mutual love of sport and a strong competitive streak.

The Garwoods are a familiar sight at endurance events but what sets them apart is the fact that Nicholas has athetoid cerebral palsy with spasticity and is severely physically disabled.

“We impose limitations on ourselves,” says Kevin. “I thought my dreams of encouraging my son through sports had been dashed with Nikki’s disability, whereas in reality I could do a lot more with him and achieve a lot more for myself.”

When they started competing, an unfit Kevin owned neither running shoes nor a bicycle. “I didn’t even have a costume.”

Today he trains six days a week, two disciplines a day, while Nikki accompanies him on the long runs and cycles on the weekend.

Never ones to shy away from a challenge, the Garwoods count the Dome2Dome Cycling Race, Momentum 94.7 Cycle Challenge and Afriman Duathlon among their racing credits.

This year, they did the Pick n Pay Cape Argus Cycle Tour and were faring well until the disc brakes started binding halfway through. “I rode Chapman’s Peak and Suikerbossie with the brakes on.”

When asked whether they finished, Kevin says nonplussed, “Of course, we didn’t go there not to.”

For the family, their quest to overcome seemingly insurmountable challenges is a theme that features strongly in their daily life and in their sport.

“Our whole life has been like that with Nikki – looking at something and finding an alternative purpose for it.”

From their first jogger/trailer combo, which Kevin could push in the run and tow with a bike, their equipment has also been a work in progress.

“I set my road bike up in a time-trial position with clip-on TT bars, so that I could sit up and push and then get down and be more aerodynamic.”

That worked well in theory until their first Ironman 70.3 in East London in 2010, when they missed the cycle cut-off by an hour-and-a-half. “I was aero but Nikki’s trailer with its hood was a parachute behind me.”

This prompted Kevin to build a new, more streamlined, trailer with which they rode the 2011 event.

“This time we didn’t make it by half an hour. The trailer worked well but communication from bike to trailer was a huge problem and we had to stop frequently.”

Team Garwood then upgraded to a specially designed bicycle with a built-in seat upfront for Nikki.

“Communication is good because our heads are close together, it’s a lot more efficient than the trailer,” says Kevin.

This year, they missed the cut-off by a heart-breaking 80 seconds. “I thought we’d made it and then to be told we didn’t . . . I think that was the most devastating race we’ve ridden.”

However, Kevin says it made them realise what is achievable with a little more training.

After their three abortive attempts, and his successful solo Ironman effort in 2010, the unstoppable team was ready for this year’s full event.

However, the treacherous winds scuppered their plans as race director Paul Wolff was forced to call off Nikki’s participation in the cycling leg due to concerns for his safety. He was however permitted to do the swim and run.

“The swim was really tough,” says Kevin. “On the second lap, I was on the verge of quitting because I thought Nikki was in distress and seasick.”

After getting blown 100m off course, he was ready to call in the NSRI to have the kayak towed back to shore. “Then Nikki said, ‘Dad, I want to do the run’.

“That was it. I put my head down and made up the distance.”

With only 20 minutes to make it to the beach, and battling the choppy conditions, Kevin realised that timing would be tight.

“I thought of Nikki’s words, visualised his face and swam as if my life depended on it. I put in every bit of technique and effort to propel myself faster to make the cut-off and did it with six minutes to spare.”

Absolutely spent, Kevin had to mount their odd-looking hammerhead bike alone without Nikki in the front seat.

“I was cycling in the most unorthodox position and used my sailing skills to my advantage – I was in an upright, strong pedalling position and the wind was pushing me from behind.”

On the last lap with 30km to go and one hour left, the bike cut-off loomed large once again. “There was no question about whether I was going to make it.

“I put in an effort – there were guys on TT bikes in time-trial position and I was just flying past them.”

Meanwhile, Kevin’s wife Cheryl and Nikki, already strapped into his new running chair, were waiting nervously in the transition area. “We create tension and specialise in cliff-hangers,” laughs Kevin.

“When they saw me coming in with nine minutes to spare, they were jumping up and down.”

As Team Garwood started the run, it began to rain.

“I got into a manageable pace and just kept going. I didn’t want to push myself too hard because I’d had a heavy swim and a hard bike at the end.”

Determined to make the cut-off, they pushed on, buoyed by the crowd support and inspiring stragglers to dig deep. They finished in 15:49:11.

“When I think of the total race, how hard I had to push in certain sections, I’m amazed at how resilient the human being is. I thought I was finished but I wasn’t – I could have pushed myself even harder.”

According to Kevin, Nikki was determined to get his medal and urged him on with, “Go, Daddy, go! Faster, Daddy, faster!”

The two share the dream of one day competing at the Ironman world championships in Hawaii, but first they have unfinished business with the South African event and also aim to finally conquer the half distance next year.

“Nikki says, ‘You know Mom, I haven’t really done Ironman – I haven’t finished it, I didn’t do the bike. We’ve got to go back’.” 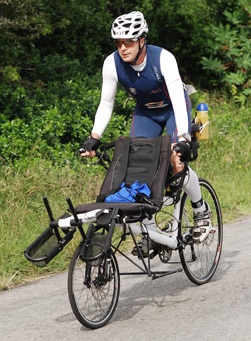