“Real life is much more like the Ironman than the rugby field,” says former Springbok prop Ollie le Roux.

“Everyone has challenges, fears and weaknesses in life. The Ironman makes you face your demons as they surface in the race and helps you to overcome them.

“It’s one of the most empowering things I’ve ever done. It changes the way you see things.”

The burly front-ranker may not sport the conventional physique for triathlon but his burning desire to test his own limits makes him a true Ironman at heart.

“Ever since I was a young boy, I dreamt of doing the Ironman world champs in Hawaii. But playing rugby professionally meant I had to shelve that idea.”

However, not content to simply hang up his boots on retirement and commit to the quiet life of Bloemfontein chicken farmer, Le Roux went looking for a fresh challenge.

“A guy really misses that feeling when the first whistle blows and the adrenalin pumps. You also crave the discipline and structure that rugby gives you.

“So I decided it was time and started training for the Ironman 70.3.”

After completing his first one in 2010, and a second a year later, he realised that he was nowhere near ready for the full version.

“This endurance thing really isn’t me. I’m a power athlete – playing rugby for 80 minutes and running for eight hours is a bit different. So I had to condition my body for it and learn to train at a lower intensity.

“I just started working at it slowly but surely. Became a better biker, better swimmer.”

Le Roux had little intention of becoming a better runner however. “I really don’t enjoy the running, so I do as little of that as possible.”

He now trains in each discipline twice a week and counts the Cape Argus Pick n Pay Cycle Challenge and Old Mutual Two Oceans Marathon among his sporting credits.

“The main thing is to do the long bike rides on the weekends – three hours on Saturday and two on Sunday.”

Ironically enough, he says, his struggles with endurance training stood him in good stead when he braved howling wind and driving rain at this year’s Ironman South Africa in Port Elizabeth on April 22.

“When I got to Ironman in those harsh weather conditions it was like just another day for me. The great athletes aren’t used to having it so tough but I’m just so used to having to slog through a race that it’s not an unfamiliar place to be.”

What was unfamiliar though was the absence of 14 other team-mates to share tactics and help him through.

“It’s amazing to be in this dark place for 16 hours – just you and God. You learn a lot about where your strength comes from – it’s a very spiritual thing in a way.”

The 39-year-old says he is used to facing psychological challenges from his rugby days. “What people don’t realise is that on the field you go through huge mental pressures and stresses, worrying about injury, your performance, the media and the public eye.”

But the physical challenge of the 3.8km swim, 180km cycle and 42.2km run was another story.

“The Ironman is essentially eight races in one – the two swim laps, the three bike laps and the three running laps.”

Le Roux says he tackled the massive obstacle by breaking it down into smaller achievable goals.

“For me, I work in half measures. I know it sounds funny but it works.

And, he says, if you’ve come more than halfway, there is no point in quitting.

“In the same way, I also aim to beat the cut-off time. If I make the first one, my goal is just to make the next one.”

During the race, Le Roux says he fuelled his body with protein and salts after finding during his rugby career that carbo-loading made him sluggish.

“I’m not the leanest of guys, so I’ve got a lot of stored energy,” he laughs. “For me, it’s about putting electrolytes back in my system, so I rehydrate a lot.

“I also drank a lot of protein recovery shakes and ate a lot of droëwors and mashed potatoes with chicken stock in. That saltiness saw me through; I didn’t cramp once and I had a lot of energy towards the end.”

He says the swim went well in the choppy conditions, “. . . but I can’t tell you how tough the bike was for me.”

“When I got to the transition area, (former scrumhalf) Garth Wright was next to me. I said, ‘Garth, how do we run after eight hours on the bike?’ and he couldn’t even answer me, he just left!

“So I started walking and then after two minutes I just started running and my body said, ‘Thank goodness we’re not cycling anymore . . .’”

Le Roux finished in 16:31:40 and is motivated to return next year. He is even contemplating taking it to the next level with the three-day ultra-triathlon in the future.

“I want people to say, ‘If Ollie le Roux can do it, then surely I can too’.

“There’s so much inherent power inside you. You don’t just want to lie on the couch watching TV – the Ironman is a healthy and constructive way to get out there and celebrate life.” 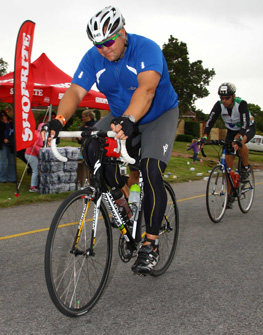