Rising hockey stars will have a final chance to impress national selectors ahead of September’s Junior World Cup qualifier when they meet at the national student hockey champs at the University of Johannesburg next month.

The University Sport South Africa (USSA) championships will see teams from 19 tertiary institutions, as well as a Namibian invitational side, compete for honours in the two premier divisions from July 1 to 7.

The A-section sides will do battle on the UJ Astroturf while the B-section teams lock horns at the Kaspersky Randburg Astro.

“It’s always an honour. It provides a great platform on which students can come and compete.”

She said it was one of the final opportunities for players to get noticed before the qualifying tournament for the world cup, which takes place in India in February, 2013.

Le Roux said avid supporters could expect to see top-class hockey with the likes of national U/21 women’s team members Nika Nel, Jenna du Preez and Kaila Flemming turning out for the home side.

She said players like UJ striker Lloyd Nicholson and link Gerald Mpopo would be contenders to earn a spot in the junior mens’ team following the USSA tournament.

According to Le Roux, the university had a strong hockey tradition and was hoping for another podium finish. Last year, the men’s side finished runners-up while the women placed third.

The latter will however be without the services of the world’s leading goal-scorer Pietie Coetzee and Bernadette Coston who are part of the senior national team for the London Olympic Games in August.

University staff member Anton van Rooyen will accompany the men’s team as manager, while Beijing Olympian and former student Adrian Carolan will act as video analyst for the women’s side.

Le Roux said one of the USSA tournament highlights would be the UJ alumni function on Friday, July 6.

“It will be a unique opportunity to bring the alumni hockey community together again. It promises to be a good get-together to catch up and any former players, coaches and managers are welcome to attend.” 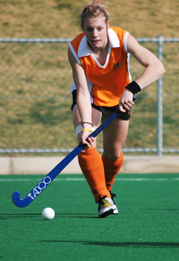 UJ will be without star player Bernadette Coston, who has been selected for the Olympic squad, when they host the USSA hockey champs in July. Photo: Supplied by UJ Sport