Written for In the Bunch

Apart from the obvious brain freeze that leads to you entering the Absa Cape Epic, this race is all about making smart choices.

The first thing to get right is to select the correct partner. One who knows when to keep quiet is a good start.

After that, a multitude of decisions – like nutrition, gear and prep – riddle the long, winding and often rocky road to the starting line of the Epic.

But, once you have registered and collected all of the sponsors’ promo items from the Waterfront in Cape Town, only five things are of any importance really: eating, riding, eating, sleeping and eating.

Therefore, I’d have to say, one of the best pre-event decisions we had made was to sign up for Woolies’ top-up meal.

Upon entering the Woolies hospitality area at each stage finish, every rider on the Epic receives a musette containing an array of delicacies. If you had been clever enough to tick the “top-up” option when entering, you are entitled to a second.

Remember, on the Epic, where most only clock in towards afternoon tea, this doubles as lunch – a rather important factor in surviving the eight-day ordeal.

However, I quickly found out that access to food wasn’t necessarily the issue. Getting it down was.

The hospitality marquee was a case in point – there were those who gulped down lunch while others were simply able to stare at it.

I was one of the latter and found myself watching in wonderment those who didn’t find the sight of food after six to eight hours in the saddle even slightly off-putting.

My team-mate, Craig, belonged to the first group. The deli sarmies, sweets and milkshakes never even touched sides.

Throughout the eight days, I’d been amazed at his efficiency in dealing with grub. I didn’t buy his explanation that “no one feels like eating” and that he too was forcing his down.

You had to eat today for tomorrow he kept on reminding me, usually while sorting out the contents of the second musette. But I think what he actually meant to say was that you had to eat like there was no tomorrow.

My hunger pains only started when most of the nausea (which went hand-in-hand with many hours in the saddle and munching allsorts on the go) had relented, so Craig often had to wait for me to finish before we could leave.

Apart from supper and breakfast, the other meals of importance were the ones out on the road. And if I found lunch difficult to deal with, these were just plain impossible.

My severe allergy to bananas – quintessential cycling food for the rest at the feeding zones – limited my options.

So I would first down three to four cups of Coke and then knock back two or three Energades while gradually adding solids. These consisted of, in order of disappearance, Marmite sarmies, potatoes, apple slices and chewy sweets.

The fact that I couldn’t get anything down was not enough reason to stop eating, for Craig’s again didn’t seem to touch sides and I didn’t want to keep him waiting (this was a race after all).

The result was that I usually left these intermediate stops looking like a hamster getting ready for hibernation.

It took several kilometres to get the concoction down and a few more, together with a strong will, to keep it down.

Even though I had been battling a cold and saddle sores from the start, it turned out that the pressure of consuming food at a rate equal to or faster than my partner, was for me the toughest part.

Earlier I suggested that the Epic was all about making the right choices and that finding a compatible partner was right up there, but who would’ve thought that you had to break it down to eating habits?

Coetzee is a former journalist and full-time cycling fanatic whose PR company focuses on sports communications. Visit www.inthebunch.co.za or follow In_the_Bunch on Twitter. 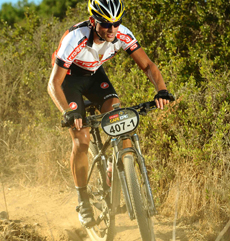