The University of Johannesburg confirmed its position as one of the most important feeder institutions for Olympic talent when the national squad for London was announced last week.

Coetzee – who increased her world record goal tally to 241 in the bronze medal match against Germany at this past weekend’s Investec London Cup – and Coston are joined by Beijing Olympians Lisa-Marie Deetlefs and Marsha Marescia in the women’s hockey team.

Also on the list are athletes Irvette van Blerk and René Kalmer, both of whom will be making their marathon debut.

Rounding out the UJ-affiliated athletes in the South African team are rowers Naydene Smith and Lawrence Ndlovu, who are participating in the women’s coxless pairs and men’s lightweight fours respectively.

Micheen Thornycroft will represent Zimbabwe on the water.

UJ staffer Anton van Rooyen will accompany the men’s hockey team as manager while 2008 Olympian Adrian Carolan is the video analyst for the women’s side.

According to director of sport Sanpat Coetzee the university had already equalled its 2008 tally of 18 individuals and was looking forward to the announcement of the Paralympic team where five athletes had met the qualifying criteria.

“The fact that students, alumni, club members and staff are represented proves that UJ Sport develops athletes and student-athletes for South African sport.”

Coetzee said the institution was proud of its contribution at a national level.

“Professor Cora Burnett’s research, done at the request of Sascoc president Gideon Sam, indicated that our universities are some of the most important role players in the long-term development of athletes.”

She said UJ’s high performance programme and support services had certainly paid dividends in a variety of sporting codes.

“It is our goal to contribute to the holistic development of the athletes while they are studying, part of our system and even thereafter.”

As far as the Olympics were concerned, Coetzee said the women’s hockey team would be the ones to watch.

“Their progress since 2008 has been remarkable and Pietie is widely acknowledged as the world’s best striker.”

She said another possible UJ medal contender could be Ndlovu’s rowing team, which took silver at the World Cup Regatta in Switzerland at the end of May. 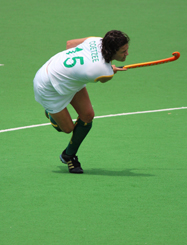 The University of Johannesburg’s Pietie Coetzee, who is widely acknowledged as the world’s best striker, will lead the South African hockey attack at the Olympic Games in London this August. Photo: Supplied by UJ Sport