South Africa’s top junior female 200m sprinter Chanté van Tonder will aim to add to her clutch of gold medals when she represents her country at the IAAF World Junior Track and Field Championships in Barcelona, Spain, in July.

The 18-year-old University of Johannesburg student secured her place at the international competition with a winning performance during the recent CAA Southern Region Junior Championships in Windhoek, Namibia.

Van Tonder ran an initial qualifying time of 24.27 seconds in the heats before going on to better that in the finals, which she won in 24.1 seconds to top the national junior rankings.

“I’m very happy with my performance,” said the sprinter, who had also claimed the 100m gold in her first outing at the same event in 2010.

This year, she narrowly missed a podium in the shorter distance, finishing fourth.

The Mulbarton, Joburg, resident said she had taken part in her first national championships in Grade Six but had only seriously begun to consider a career as a professional athlete later in high school.

“I’m now working towards the next Olympic Games in 2016 – that’s my long-term goal.”

Van Tonder, who is in her first year of BCom entrepreneurship studies, said she had received a lot of support from the university. “They’ve even helped me with academic mentoring to balance my studies and sport.”

She said she had been disappointed at missing her first USSA Track and Field Championships, which was hosted by UJ, as the event had been held over the same weekend as the Southern African competition.

“She had a niggling hamstring problem coming out of the SAs in April and we took a bit of gamble letting her compete at the Southern Region instead of the student champs but it paid off.

“In these big competitions, she’s really pulled through for us.”

Moletsane said Van Tonder, who is coached by former South African athlete Corné du Plessis, was one of four promising young female sprinters currently being groomed by the university.

The other athletic bursary holders are Bevin Smith, Alyssa Conley and Liphiwe Nxasana. “They’ll mature nicely together and we’ve organised academic mentoring for them, just to look after their wholistic well-being.

“We’re hoping to nurture them for seasons to come. UJ Athletics is definitely on the right track and our team is certainly improving in terms of depth.”

The world junior championships takes place in Barcelona from July 10 to 15. The official announcement of the national squad is expected shortly. 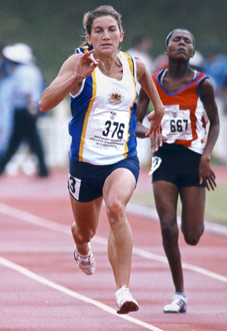