Defending champion Max Knox will team up with two-time former winner Mannie Heymans as they take on the three-day sani2c, presented by BoE Private Clients, which starts at Underberg in KwaZulu-Natal on Thursday.

Knox – who heads the MTN National Mountain Bike Marathon Series after five of the eight rounds – and his Namibian partner will be up against Old Mutual joBerg2c winners and pre-race favourites Kevin Evans and David George of Nedbank 360Life.

Both teams are on good form following the MTN series race at Mabalingwe on Saturday, which saw Knox finish runner-up to George with Evans placing fourth.

“Obviously they’ve got good form at the moment and, barring a disaster, will be the outright favourites,” said Knox, who will be riding in the colours of Ormin-Craft.

The 25-year-old was gifted a win alongside Adrien Niyonshuti last year when the 360Life riders overshot a turn on the final day.

“We won last year but that was last year. Everyone starts afresh on equal footing so anything can happen.”

Last year’s runners-up Neil MacDonald and Waylon Woolcock of RE:CM – who  won two stages of the recent Old Mutual joBerg2c en route to finishing second overall – won’t be on the starting line following a heavy crash at Mabalingwe by the former, which left him with a broken collarbone and fractured wrist.

Those who count themselves among the favourites will however face another set of challengers in the form of former South African cross-country champion Brandon Stewart, who exchanges regular partner Jacques Rossouw for last year’s national road champion Darren Lill. The duo will be pairing up as FedGroup-Itec Connect-Bonitas.

Knox said he and 40-year-old former African champion Heymans, who quit professional cycling a year ago, would still be riding competitively but were realistically aiming for a top-five finish.

As former winners, the Sabie resident said he and his Windhoek-based partner looked forward to sharing their accumulated knowledge with the social riders at the event.

“We’re going to have a good time with everyone and give back to the event in any way that we can.”

Knox said he was very happy to be riding with the former Olympian. “He’s got a lot more years of experience and a better understanding of racing than I do.”

He said the consistency of his own performances in the countrywide MTN series thus far boded well ahead of the race.

In the women’s race, two-time Old Mutual joBerg2c winners Ischen Stopforth and Catherine Williamson of bizhub-FCF will team up for their first crack at the title.

They will face stiff competition from Theresa Ralph and Karien van Jaarsveld who will be teaming up for Dischem Britehouse MTN. “It’s going to be quite a race!” said Stopforth.

Contego 28E’s reigning champions Erik and Ariane Kleinhans will be aiming for a trifecta of wins in the mixed category of major stage races following runaway victories at the Absa Cape Epic and Old Mutual joBerg2c. 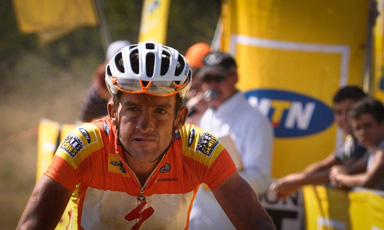