Pedestrians and cyclists in a rural KwaZulu-Natal community will now be a lot safer as thousands of bicycles leave more than just tracks alongside the regional road.

In a demonstration of what organiser Glen Haw calls “the power of mountain biking”, the sani2c, presented by BoE Private Clients, is building a lasting legacy in the form of a 3.5km dual-purpose cycling lane and pedestrian sidewalk along the R612 between Hlutankungu and Jolivet in the Highflats region.

The three-day race, which takes place next week, and the nine-day Old Mutual joBerg2c, which finished on May 5, both traverse this high-traffic stretch of road on the penultimate day of each event.

With four pedestrians, including two children, killed last year alone, the shoulder of the road is particularly treacherous during the dense mists that often shroud the area.

The development project is the result of a unique partnership between sani2c, its route sponsor Caterpillar and the provincial department of transport and is driven by concerned local contractor Charlie Shewan.

“Before we started this project, there were tree branches overhanging the yellow line, so in some places the kids were actually walking in the roadway. You can’t believe how close they came to the tyres of the trucks going by.”

Shewan, who owns Cotts Earthmovers, said the first phase of earthworks and bulkworks had already been completed after getting the go-ahead from authorities just before Easter.

“We’ve moved about six or seven thousand cubic metres of earth to make room for a pathway.”

He said the next phase would involve creating a 150mm high kerb and channel with a two-metre wide in-situ concrete track and guardrail.

“The Department of Transport has promised to supply the materials. We want to try and have it ready by the next sani2c. The entire project is three years.”

Shewan, who lives in the nearby Ixopo area, said the private sector-driven project would also create temporary jobs by employing local labour.

He said the response from the community had been overwhelmingly positive.
“They are so grateful. The sidewalk makes the road safe for the cyclists and for the community – it’s a huge win-win and the locals are very happy about it.”

According to Haw, this project exemplified the spirit of the sani2c, which has a strong community-development focus at the heart of its business model.

“That’s how we roll,” he said. “We get an awesome route and a good reputation with the community – everybody benefits.”

Haw said the project had been a long time coming after more than a year of negotiating with various parties. “I was beginning to lose hope that this project would become a reality.

“Were it not for Charlie’s persistence and help with gaining permission, I think I would have run out of energy. It is for this reason that we have named it Charlie’s Catwalk.”

The sani2c is the world’s biggest fully serviced mountain bike race and will see three groups of 1 300 riders each tackle a testing route from Underberg to Scottburgh.

The annual mountain bike challenge is divided into a Trail (May 15 to 17), Adventure (May 16 to 18) and Race (May 17 to 19) and the riders will use the newly graded route as they head towards the finish line at Jolivet Farm on stage two. 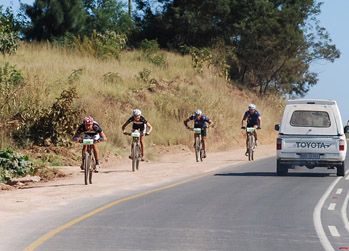 The sani2c mountain bike race, presented by BoE Private Clients, is building a lasting legacy in the form of a 3.5km dual-purpose bicycle lane and pedestrian sidewalk along the R612 between Hlutankungu and Jolivet in the Highflats region. Pictured are riders in this month’s Old Mutual joBerg2c enjoying the first phase of the sidewalk. Photo: Coetzee Gouws/Full Stop Communications