The depth of netball at the Nelson Mandela Bay Metropolitan University in Port Elizabeth was again highlighted when three players were selected for national duty.

Vice-captain Zanele Mdodana and Mampho Tsotetsi, who helped the SPAR-NMMU alumni to the local league title last week, have been named in the senior side for the three-test series against Jamaica in June.

In addition, Zanele Vimbela, who captains the SPAR-NMMU first team, has been drafted for the South African student team, which will take part in the inaugural World University Netball Championships in Cape Town this July.

Mdodana’s inclusion makes her the most-capped player in the team. “Although I’ve played for the Proteas since 2005, you can’t take for granted that you’ll walk into the side.

“For the selectors to know that I’ve still got something to contribute to the team and the country is a huge compliment.”

Wing defender Mdodana was positive about the team’s chances against the Jamaicans, who are currently ranked fourth in the world. “They say a happy team is a winning team, and we really have no issues at the moment.”

She said Tsotetsi’s inclusion at centre proved that hard work and perseverance paid off. Although she has been a squad member since 2006, it is the first time that the former national U/21 player has made the grade.

Tsotetsi will also join SPAR-NMMU’s Nontle Gwavu in the South African student team for the All-Africa University Games in Senegal in September.

Goosen said Vimbela, an honours student in human movement science, had shone throughout the selection process, which started with last year’s USSA champs.

“Zanele is loved and respected by her teammates. She doesn’t say much, but leads by example.”

In another coup for the university, head coach and former Protea player Lana Krige will do duty as national assistant coach in Cape Town. 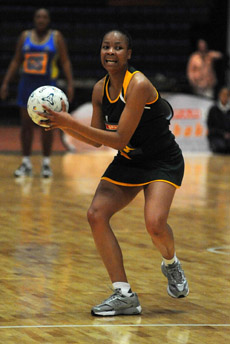 SPAR-NMMU’s Zanele Mdodana will be the most-capped player in the SPAR Protea team to take on Jamaica in a three-test series in July. Photo: Francois du Plessis